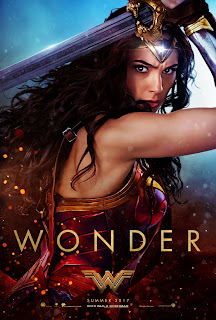 One word... FANTASTIC!!!!! My wife and I have been waiting for this movie for so long that at Christmas time we asked for Movie gift cards so we could seer this and Justice League because we knew money would be tight. We waited in anticipation until the day came this came to theaters and I want to go see this again.

The movie fits in with the current universe of DC movies as it opens but hten this is a flash back origin story in the best way. Gal Gadot was absolutely impressive in Batman versus Superman and she surpassed that performance in this movie. We see Dinana Prince walking into the Louvre on her way to work and a Wayne Enterprise truck shows up to deliver a case to her. This is where the story flashes back to when Diana is just a little girl on Themyscira growing up under the shadow and protection of her mother the queen. Here we get to watch Diana grow up until the world of the Amazons is shattered by the arrival of Steve Trevor as his plane crashes through the magical barrier.

We then get to see Diana defy her mother's wishes and take Steve Trevor to leave Themyscira and head to the world of man to help end Ares the god of War and stop World War 1. There are some great lighthearted moments, like Diana's discuss at how women are treated in 1918 London. How women are supposed to fight in the layered dresses. Also, Steve Trevor's secretary is quite funny and her interaction with Diana is just great.

All that aside I am humbly moved by this movie. I have always been conscious of the struggles women face and I hope everyday that my daughter doesn't have to deal with the same hurdles when she grows up. She always wants to be Batman or the Flash and never wants to be Batgirl. I want my daughter to be proud to be a woman and have a strong role model other than my wife to look to. Wonder Woman, I mean Gal Gadot and Patty Jenkins are those women. I had no idea that I had been waiting all my life for this movie until I saw. it. I want my son to know that Women can be strong and deserve respect so I am as much excited for my daughter to watch this movie as I am my son. I was moved to tears at one point and had goosebumps through the whole movie.

This is easily the best movie I have seen all year and I'm so glad I finally got to see it. My wife and I loved this and wish we could go right back to the theater to watch this again. If you haven't seen this movie yet I beg you to go. It doesn't matter if you are a comic book fan or a Wonder Woman fan this is just a very well done movie with a moving story and a cast that was perfect for every role. I give this 5 out of 5 stars and will give it 10 out of 5 just because this is my blog and I make the rules. Check out the trailer below.