Batman Vol 2: I Am Suicide by Tom King 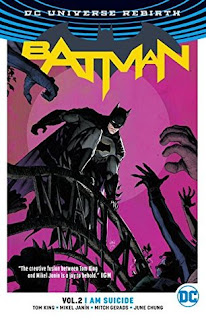 I have been a fan of Batman since I first started to read. Being able to follow this series has been very exciting. Thank you to Netgalley and DC Comics for letting me read this for a review. Batman is desperately trying to help Gotham Girl after she was whammied by Psycho-Pirate . In order to try and get to him he has to go through Bane. 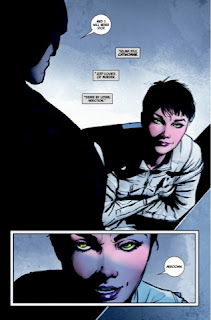 To do this job Batman has to enlist the help of some strange characters. Batmaan creates his own version of Suicide Squad. The biggest shock in his decision isn't who he picks for his team but why she is locked up. Catwoman has been locked up for killing 237 people. I'm not going to lie, I still have the last 2 books of the Batman series to read before Rebirth took over. Rebirth was so exciting I jumped ahead so I could get started right away so I have no idea what is going on. Apparently Catwoman is awaiting lethal injection for killing the terrorists that wiped out the Orphanage she grew up in killing everyone inside.

I will admit that the story for this book wasn't as good as volume 1 nor was the art work up to the standard either. A good portion of this book is just a letter from Catwoman to Batman and then a letter from Batman to her. I have always enjoyed the relationship between Batman and Catwoman so I enjoyed the letters but it didn't fit with the action going on in the panels so I was a little distracted. 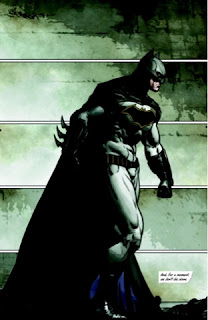 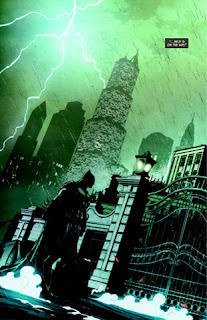 The art work was good but not as detailed in most of the book. There were some good panels that had a good bit of detail to show just how Gotham can be. Batman has some good pages too but I just felt that this could have been better. I know the artists tend to change issue to issue but when Vol 1 had such amazingly detailed art I was a little let down.

So all this negativity I am sure you are guessing I didn't like this. Well you would be wrong, this book may not have lived up to what I expected but it was still very well done. I wish there was more to the story instead of the letters over the action, but I loved the characters. Bane is a changed villain which added more depth to his character and made me want to see where his story will go in the future. Seeing Batman and Catwoman deepen their relationship was great, and I would love to see more in future books. I have always wished those two could make it work. This was an enjoyable story and I can't wait for the next volume. This is a 4 out of 5 star read.
Graphic Novel