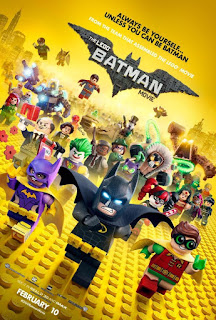 We are a big Lego Family. I have quite a few big sets and my Son is a huge lego fan and has som any of the smaller sets that they wont fit in his closet. We are a big Lego family but we are an even bigger Batman family so when this movie first hinted that it was coming out we got super excited and couldn't wait.

We took the kiddos to see this movie this past Friday and I know it wasn't release weekend but I always like to avoid any chaos from opening weekend and read some reviews before I decide to spend my hard earned cash on an expensive night out. So we all went out and bought the giant popcorn to share and sat back and enjoyed a great night out as  family. As I mentioned I read a lot of reviews that don't have spoilers when the movies come out and this was had nothing but great glowing reviews which seemed really odd to me. Critics hate DC Comic movies and tend to smear them and say they are the anti Marvel Movie, which by the way, Duh. Even Rotten Tomatoes gave this movie a 91%. With all the hype and all the praise I really worried this wasn't going to be that great. I loved Batman vs Superman, and Suicide Squad and these were trashed by critics. Let me tell you, Lego Batman lives up to every complement and amazing review out there. Here is one more.

This movie has everything a Batman fan would want. There are old crappy villains in this like Egg Head from the 60's Batman show, and Condiment King who was in the Cartoon in the 90's. It was so much fun picking out all the little characters that show up in this movie. I also really got a kick out of the fact that Ralph Fieenes, who Plays Voldemort in the Harry Potter Movies is in this movie and doesn't do the voice for Voldemort. Ralph Fiennes is the voice of Alfred and I think did a fantastic job in that character. The Lego movies do their hardest to make Batman the absolute opposite as what the character is in the comics but it is ok. It's funny, and the kids love it as well as the adults.

This movie has a deeper moral meaning in the whole thing. It's all about family and working together as a team and watching Batman grow as a minifigure., The action is amazing through out and when there isn't action scenes the jokes are hilarious. There are also so many homages to the old movies in here that was just so much fun to watch. Going through the Bat-Cave and seeing Lego versions of the Batmobile from The 1989 movie and Batman Forever as well as so many other versions I remember was a big thing for me as such a huge fan of Batman.

I absolutely loved this movie and want to watch it again right now. Yes I pre-ordered this on iTunes as soon as it was available. The story is great, the voice actors are wonderful and the music was just awesome. Having Richard Cheese the guy who makes popular songs into Lounge song versions does Man in the mirror and Everything is Awesome. They also have a new song Who's the (Bat)Man which I bought as soon as I heard this through Nerdist. Here is the link to their post so you can check out this awesome song. Also please enjoy the trailer at the end of this review because it is absolutely a 5 out of 5 star movie.