The Wind Through the Keyhole by Stephen King 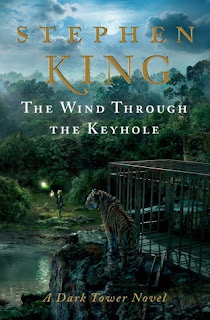 The Wind Through the Keyhole

I tend to spend some time thinking about my reviews before I put cursor to blog. I was looking over my first review when I read this book originally and I took some time to think about this. I have come to the same conclusion that where this is fun to revisit with old friends, this really doesn't have much to do with the Dark Tower series. Allow me to explain. This book picks up right after Wizard and Glass. Our Ka-Tet of Roland, Eddy, Susannah, Jake, and Oy are heading further down the path of the beam after leaving the emerald castle. On their way the feel a storm brewing and seek shelter. While tucked up in an abandoned building Roland plays story teller. This is where our series stalls and the stories begin. Our Ka-Tet is only in the book at the very beginning and the very end. The rest of this is two stories from Roland's past and the days when Gilead still stood.

Stephen King has a foreword where he says that he was really happy to know his friends still had more to say. He goes on to say that even though this is an in between novel it can be read as a stand alone. If you are a fan of fantasy and you like good story telling then I would recommend this book. It is completely worth the read. Now the other side of the coin will come later so bare with me.

I did say that the beginning and end is the only place we see our Ka-Tet, but the first story that Roland tells is actually of his history. So it isn't the Roland we have come to know in the last four books but another building block of how he got to this point in our timeline. Shortly after Roland becomes the youngest Gunslinger his father sends him out on a mission to find out what is going on with a possible Skin-walker that has been terrorizing local baronies. The second story is also one from Roland's past but rather it is a sort of bed time story that his mother had told to him as a kid.

Now for the review and the other side of the coin that I mentioned earlier. When I read this for the first time I was so excited to have more Dark Tower so my excitement was through the roof. This could have been the worst book in history and I would have loved it no matter what. Still, I originally gave this book 4 out of 5 stars,. With all my excitement I still didn't give this a full 5 stars. This time around I am reading these books in audio because I just don't have time to sit down with a book and read. I have to squeeze in my books while I work in audio. Reading this book I found my attention wandering. I tuned out the book and focused on my work instead of being able to multi task listening to the story and doing what I needed to. The excitement was gone since I had already read this and since it didn't really advance the Dark Tower story I just couldn't get into this like I did on a first read.

I got my wife reading these books and and she stopped at Wizard and Glass. She has yet to continue on but wants to. She asked if she needed to read this book before she moved on to the next and I told her no. It doesn't advance the story so you don't need to read this if you really don't want to. She isn't as big a fan as I am but she did say she would go with me to see the movie when it comes out. You better believe I will review the movie here after I see it. So even though I gave this book 4 out of 5 stars the first time I read it I have to revise this rating. I am giving it 3 out of 5 stars. It is still a good book and enjoyable. My reason for dropping a star was because it didn't have the same  excitement or draw on a second read that the others have had. It has its place on the series but at the same time just draws out Wizard and Glass instead of getting back to the quest at hand. May I recommend that if you are going to read the Dark Tower series, and want to read this. Read the books as they were 1-7. Then go back and read this. I love Wizard and Glass but it is a long book and you spend most of it in Roland's story. Going from one story to two others before we get back to the beam drags this out a bit more than I liked.
Sci-Fi