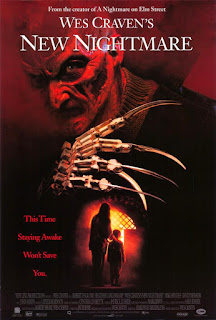 Happy Halloween everybody!!! I love this holiday and I am so excited to take my kiddos out Trick-or-Treating. They look so cute in their costumes and I just love hearing how cute they look by all the people we visit. As a parent I just love people gushing over my kids. If it wasn't for the fact that by the time we get home and get the kids to bed I'm just exhausted, I would do what I used to and watch as many horror movies in the dark as I could until I passed out on the couch. Instead I saved the best for last.

Freddy Krueger is one of my all time favorite monsters. I say this but I must clarify that he is one of my favorite next generation monsters. The Universal Studio monsters are still classics but there are those that came after. Freddy Jason, Leatherface, and Michael Myers; these are what I consider the next generation of monsters. Nothing has really come since them and the original movies may be considered classics but there really hasn't been a good monster character boot up a new franchise. At least not one I know of, so if I'm wrong please let me know.

Ok so why do I think this is the best movie of this Netfilx list. Not only is Freddy Krueger one of the scariest monsters out there but this movie crosses the barrier of fiction to reality. I know what you are thinking, I have lost my mind because this is still a movie and a pure work of fiction. In this movie most of the original cast of A Nightmare on Elm Street is back but they are back as their real life selves. They show interviews and such and how these actors are living their lives after this movie masterpiece has been out and about. Freddy is starting to push through the lines of fiction and effect Robert Englund and Heather Langenkamp which pulls Heather into the movie as Nancy once more.

This is the perfect Halloween movie and I recommend it to anyone looking for a fun scare. I say fun scare because the first time you watch it it can have it's moments that can really get under your skin and push the goosebumps out, but it is still a campy horror comedy that is just a fun ride. Robert Englund is also the absolute best Freddy Krueger out there. He created the screen version of the character that set the rules and tone for the remake and any future remakes. No one will ever play the role as well as he did. This wasn't the last time he donned the makeup to bring Freddy to the screen but it was one of the last.

I can't say how much I love this movie and it may not be the best horror movie out there but I rank it very highly. I was so glad to see this on the list so I had an excuse to watch this a review it here for Halloween Week. 5 out of 5 stars for this one. Happy Halloween.