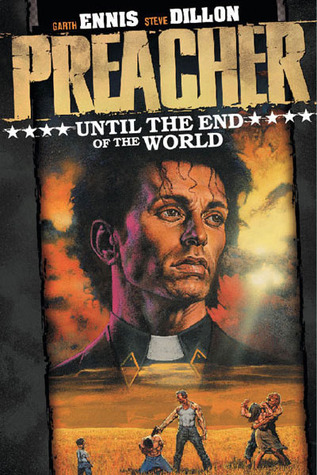 This book is all kinds of messed up. This is full of sex, violence, and language that make this clearly an adult comic. The Grail is this uber religious organization that is out looking for the entity that now resides in Jesse. I'm not 100% sure if they are looking for him to worship or to remove competition from the high father of this group. It kind of goes back and forth to be honest.

This book picks up right where the first one leaves. off Jessie is looking for God since he has just left us all to fend for ourselves. While on this quest Jesse takes some time to catch up with Tulip and Cassidy is looking for an old girlfriend. The search for Cassidy's girlfriend leads them to a degenerate sex party which has enough sick people and gross acts to make this a little uncomfortable to read at times. Form there Jesse and the group learn about the Grail and their focus changes when Cassidy pretends to be Jesse so the Grail will take him and not Jesse.

This book is a great source of character development. We get to see Tulip and Jesse sort of reconnect and have the basic couples arguments like, Tulip wants to go into the dangerous cult and kick some ass and Jesse just wants her to stay behind because he can't stand the thought of loosing her again. We get Cassidy's origin story this time which I will admit was a little slow but I was interested to see how he became a vampire.

So this Grail is a messed up religious cult who believes they have the one true savior who has been bred with the blood of God himself keeping the line pure. You might be picking up just how crazy this really is. They want Jessie so they can control the entity in him which will eventually control God himself. Jessie is going to find these guys and wipe them all out to get Cassidy back. As soon as that is finished he is back on his quest to find God and slap some sense into him and find out why he stopped being the man in charge.

I really liked this book but I didn't feel it was as good as the first one. Book one was my introduction to this character and then was followed by the show so I think I was a bigger fan boy reading the original book. There was a good bit of  down time through out the story unlike the first book. It isn't fair to compare each book toone another but when it is a series I feel you can. I give this book 3 out of 5 stars and I can't wait to get to the next one.
Graphic Novel