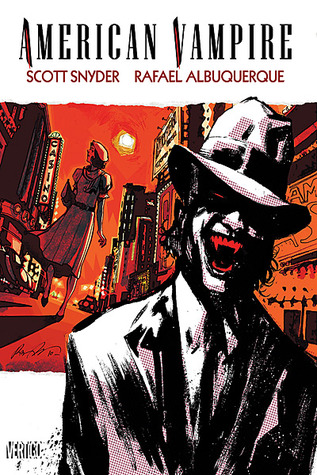 I have no idea what to say about this book so I fear this will be brief. I really liked this book. This is just a continuation of the story which is why they really don't put titles on this. With books like Batman you get s story in each graphic novel volume but these just keep going. There isn't anything wrong with that by any means so don't think I am being down on this book I'm just stating there doesn't seem to be a singular plot in this book.

This book picks up 10 years later than Volume 1, I think.At this point Skinner is running a brothel and has some deal with a band of Vampire Hunters who are to leave him alone so he can help them get rid of the Fat Cat ancient vampires who still run everything. Then there is Pearl. She has apparently had her fill  of the blood of these aristocratic vampires who left her for dead and has settled down with the love of her life to watch him grow old. She wants nothing to do with the outside world but just to be happy.

The pacing is a little slow I felt in this book but the story is strong enough to hold a reader's interest. This is a testament to the solid writing of Scott Snyder. Speaking of the writing I can't rave enough about Scott Snyder and his writing. So as much as I love his work I have to admit that I miss Stephen King. Volume one had both Snyder and King. Snyder write Pearl's story and King wrote Skinner's. This worked so well and I loved the first book. It is what hooked me on this series and I am anxious to get on to the next volume. Not having King made me feel like Skinner's story was lacking. Pearl is Snyder's character so she is easier to write for him, but Skinner was the creation of King and I would have liked to have seen more from his story. Maybe in the next book.

I liked this book and I am enjoying the series. I'm anxious to see what comes next. I give this book 4 out of 5 stars.
Graphic Novel Horror