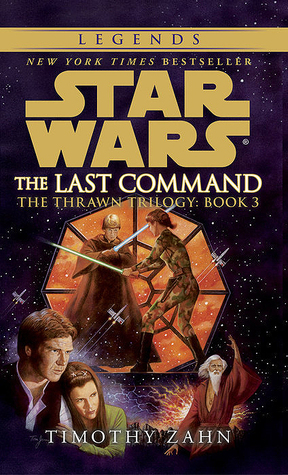 I have been anxious to get to this book and see how it ends. I knew that this is cannon to Star Wars so I was kind of hoping to get some hints as to what is going on in the new Star Wars movies. Unless there are some things coming to tie this trilogy in to the new movies I don't think these were even considered in the writing of The Force Awakens.

Leia has given birth to her twins and C'baoth is still trying to take Luke, Leia, the twins and now Mara Jade to help bring back the Dark Side. Grand Admiral Thrawn is gaining power and ready to drop C'baoth before he really becomes unhinged. Not much changes in the story in this book. It is almost like the first 2 books were all character study. I get in a trilogy you have one over all story but I feel like I didn't need the first two books if this had a little more in the beginning of this. The one change in this book is Mara Jade is starting to waver on her dire need to kill Luke Skywalker. The voice of the Emperor is strong in her head but the Force in her is fighting back.

Now, there was some time in between my reading of these books so this may be a spoiler but I feel pretty strongly about this piece. You have been warned. I don't know if this was hinted to in the previous books but one of the big events in this book is the fact that we find out that C'baoth and Thrawn are trying to reboot the clone wars. A cloning chamber of the former Emperor's has been re-opened for business. All that build up and they want to rehash Episode 2. The movie wasn't all that great and here we are doing it again. There is an interesting twist on the whole clone thing at the end.

This may have lost my interest a little but it is the characters that I enjoy and the reason I chose to read these. The end of the book was enjoyable but getting there was a little tough to get through at times. I'm glad I read this trilogy but I didn't gain any insight into the new movies as I had hoped. I give this book 3 out of 5 stars. Not sure if I will seek out more book in the cannon but it's a possibility. I do want to read the novel adaptation of The Force Awakens. There is always stuff in the books that didn't make it into the movie.
Sci-Fi