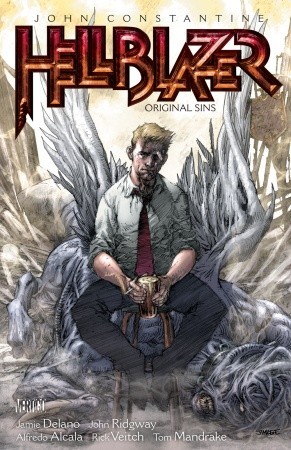 Long long ago I took my wife to see the movie Constantine with Keanu Reeves. We were engaged at the time so this was a while ago. I had never heard of who this character was but I knew he was a DC Comics/Vertigo character and it had Keanu Reeves in it and this was right after the whole Matrix thing so I figured this had to be good. I liked the movie so I was interested in the character, just not enough to look for the comics. Then in 2014 NBC put out a TV version that was really good. Sadly in standard NBC fashion, they cancelled it for other brainless reality shows. I really liked the show and was so sad to see it cancelled but this still wasn't enough to get me interested in finding the comic. It wasn't until this season of Arrow that brought John Constantine back to TV that I finally had to find the first volume and find out what I have been missing.

I wasn't the only one who was looking for this because I had quite a wiat to get this from the library. Reading this book I took a ride to the past enjoying the flat pages and old art work that all books done in the late 80's used to have. What I mean about flat pages is this book was published before they started using the glossy pages. The art work is very dark or faded and no where in between. There are a lot more panels per page in the older books also. There is also a lot more story in the older books. Instead of a comic being mostly pictures with enough words to move the story the older books are more novels with pictures.

This is like any other graphic novel and it collects several issues in one great book. However, like most graphic novels have one underlying story and this didn't. Each issue was its own story and ended so it was easy to read and issue put this down and come back later. The collection was interesting but just couldn't hold my attention. I had to use all 6 of my renews with the library so it shockingly took me 12 weeks to get through this book. I liked the first story in this book which was about a curse that makes people eat non stop while wasting away to death due to an insatiable hunger. Other stories were just kind of ok.

So I am going to give this 3 out of 5 stars. If I was judging this as a single novel I would have had to go with 2 stars because Iw as a little let down even with the mindset this is an old comic. First published in 1988 I knew what I was getting into. I just didn't think the writing was all that good and the art work could have been better. Some of the Batman books I have read in the Late 80's early 90's still had amazing scenes even with the dark or faded look. The reason I give this 3 stars is for the character. I still like Constantine, and even though I didn't care for the book. I want to read on and see who the character evolves as time passes. I want to keep going to see if they get better.
Graphic Novel