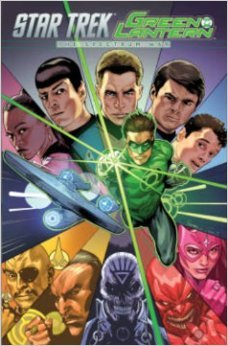 My nerd alarm went into overdrive when I saw this on NetGalley. I am not as die hard a fan of Star Trek to consider myself a true Trekkie, but I am a huge fan of Green Lantern. When I saw the two of them in one amazing comic book I couldn't tap request fast enough. This story is all about A battle between the different emotional corps and Ganthet uses a set of rings to send all our favorite characters to another universe. So not only do we have a lantern from every emotion in the Star Trek universe but we also have a set of rings just waiting to find new owners.

Who would you think would get each ring? I was kind of surprised by some of the choices. I kind of figured that a Klingon would end up with a Red ring instead of a yellow, but still it worked for the story. Even though the reason for everyone being sucked into this new universe was a war between the different corps the big threat is Nekron. Now all the lanterns in this Universe have to find a way to pass their differences to work towards ending Nekron. 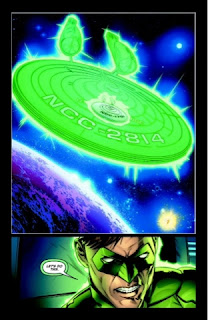 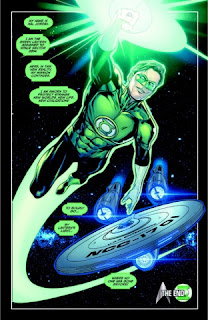 This was a really interesting twist on these two series. So many times   these comic crossover events just suck. One of the writes doesn't know how to write the other characters or the artist just doesn't understand what each world should look like so they make it their own and it just doesn't work. This worked on every level Just check out these examples that clearly show that Angel Hernandez gets both worlds. I also have to admit that this doesn't really give anything away, but the page on the right made me uber Geek out when Mike Johnson found a way to make the Lantern Oath and the Star Trek mantra mesh as one. These were two of my very favorite pages from the book and I had to include these in my post.

I easily give this 5 out of 5 stars. This was a really fun read and I can't thank Netgalley enough for letting me read this early.
Graphic Novel