I need to catch up on The Flash. I started on book 5 and haven't read anything before that. I have been fortunate that DC Comics through Edelweiss to get this book for a review. I have read some less than favorable reviews of the first few books but I have enjoyed the ones I have read. The only thing I wish I would have a better grasp on is why the Blue Flash. I need to get caught up to fill in that missing piece.

This book picks up right where book 6 leaves off. The tear in the Speed force has been fixed but Blue Flash is in our world and The Barry we know is stuck inside the speed force without his powers.  Barry runs into a group of people from different times who have been pulled into the Speed Force and have been living there for no one knows just how long since time doesn't have the same rules in there. In our world the Blue Flash has decided he get a chance to stop criminals and enact his own justice before they can commit the crimes that are part of his past. This makes him a very dark character. Both characters are on personal missions through out the whole book. Even though they are different missions there is a parallel feel to this book. 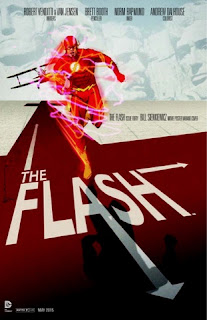 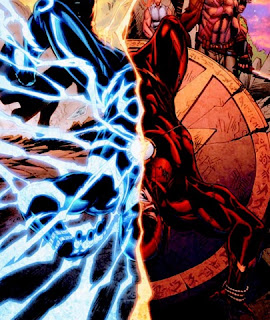 The overall story of this was pretty good. I couldn't put this book down and flew right through it. I am anxious to see where the story is going to go in the next volume because this wrapped up nicely. There was one little thing at the very end that I would like to see the next book deal with but I'm not going to say what it is so I don't ruin the surprise. On top of the story being worth the read the art work was also very well done. One of my favorite pages is a split scene that shows what both Flashes are dealing with. I trimmed the picture a little so not to reveal anything that might be taken as a spoiler but you can still see the level of detail in just this page. I also really like the variant covers at the end of the book. My favorite is a take on the original movie poster for one of my favorite Alfred Hitchcock movies North by Northwest.

I enjoyed this book and I would recommend it to any fan of the Flash. I give this book 4 out of 5 stars. Thank you again to DC Comics for letting me review this and Edelweiss for making this possible.