Showing posts from January, 2016
Show all

Ash Vs Evil Dead I did say that this year I wanted to review more movies and shows so here is my first of the new year. Ash Vs Evil Dead is so worthy of a review I couldn't wait to watch this show and then review it. I don't have the movie channels so I begged a very good friend to log in to the Starz app on my iPad so I didn't have to wait for it to come to iTunes. By the way it is available for pre-order and will be available in it's entirety on Feb 1st. I can't wait to binge watch this again.  Bruce Campbell is the main man himself and reprises his role as Ash in what I would consider a reboot of some of the best B horror movies of all time. Evil Dead, Evil Dead 2 and Army of Darkness are some of my favorite movies ever and I watch them all of the time. I was late to the party so to speak and didn't find these amazing gems until I was in college and my wife and I watched these together for the first time. She's a fan too. When I saw that there
Post a Comment
Read more

Dolores Claiborne So I am on a mission to read every Stephen King book I can. I finally got around to reading this book and I must say it was just weird. This book opens with a sweet old lady telling a story. She is under arrest and complementing the officers and saying they are fine young men who she remembers running around in soggy diapers. So it is odd that this sweet old lady is being read her rights and telling a story like it is bingo night. Then Dolores says she didn't kill that bitch but if they want to lock her up for killing her husband that's fine. I was floored and when I thought it couldn't get weirder good old Dolores asks for something to drink and says "Thanks Honey Bunch" to the officer. I had to laugh.  That is kind of where the fun drops off. This book is exactly like talking to a Grandparent who rambles on telling a story but never really gets to the point. My Grandparents are great so I haven't really had this type of situation
Post a Comment
Read more

Savage World I need to catch up on The Flash. I started on book 5 and haven't read anything before that. I have been fortunate that DC Comics through Edelweiss to get this book for a review. I have read some less than favorable reviews of the first few books but I have enjoyed the ones I have read. The only thing I wish I would have a better grasp on is why the Blue Flash. I need to get caught up to fill in that missing piece.  This book picks up right where book 6 leaves off. The tear in the Speed force has been fixed but Blue Flash is in our world and The Barry we know is stuck inside the speed force without his powers.  Barry runs into a group of people from different times who have been pulled into the Speed Force and have been living there for no one knows just how long since time doesn't have the same rules in there. In our world the Blue Flash has decided he get a chance to stop criminals and enact his own justice before they can commit the crimes that are par
Post a Comment
Read more

Small Favor I love Harry Dresden, as a character he is funny, powerful, and someone you can kind of relate to. Harry Dresden is a wizard Detective and even though he has all these impressive powers he seems to constantly get shafted and more crap dumped on him than anyone person should have to handle. I think that is why I connect so well with this character. I tend to get dumped on by life and yet I still seem to survive anyway. This aspect of Dresden makes for some really funny smart ass comments.  In this book Harry is being hunted (like every other book) because he has really pissed someone off. To make matters worse the evil queen of the Winter Court has come back to ask a Small Favor of Dresden since he owes her. On top of all of that one of the most powerful demons Dresden has gone up against is back and either trying to kill him or recruit him. Oh yeah, I almost forgot, Mob boss Marcone had been taken also and Dresden has been asked to find him and get him back. Th
Post a Comment
Read more

The Girl in the Spider's Web by David Lagercrantz

The Girl in the Spider's Web I loved the Millennium series when I finally got around to reading them. I read the series after the third book had already been published so I din't have to wait for the next book. Like most fans of the series I was saddened to hear that Stieg Larsson had passed and those three books were all I was going to be able to read. Then I had heard reports that his daughter had found an unfinished story and she was looking for an author to finish it and carry on her father's work. I'm not sure if this is that book or if David Lagercrantz just wrote his own book with Mr Larsson's characters to continue the series. I will be honest and I haddn't kept up with the news on this book after the initial passing of Mr Larsson.  I have to admit that I was really disappointed in this book. I want to make it perfectly clear that I have nothing against David Lagercrantz and his writing style. My problem was the story, the plot. I had this boo
Post a Comment
Read more

Anarky I was fortunate enough to be granted a review copy from DC Comics and Edelweiss and I really enjoyed it. This is less of a collection of issues that tells one story but a collection of many stories. The biggest story does revolve around a new villain named Anarky who wants to free the people of Gotham and allow them to choose their own form of government and Justice.  This main story was pretty good but I have to be honest. There was something about the whole thing that seemed very familiar to me. It's kind of hard to explain without giving something away but I will say that the ending of this particular story wasn't a big surprise. The story at the very end I also really enjoyed because Batman has to rely on The Riddler to help him get into a prison that the Riddler created in order to bee free of all his many indiscretions. This story had a good little twist to the end of it and seemed to set up events for the next volume maybe. The Detective Comic serie
Post a Comment
Read more

The Killing Lessons by Saul Black

The Killing Lessons I got this weird email from Goodreads one day and it said that my favorite author Jeffery Deaver enjoyed The Killing Lessons. Now I thought this was a little odd because anytime you hear someone enjoyed the killing lessons your first thought might be to buy more locks for your door, espcially if that person is your neighbor. Turns out the email was a review of the book by my favorite author of all time Jeffery Deaver. He had some great things to say about this book and as a good fan I jumped at the chance to add this to my to-read list. Well I finally got around to reading this and I really enjoyed it.  This book follows different characters through the whole story. The constant switching from points of view can be a bit frustrating at times but it wasn't enough to deter my enjoyment. The main plot revolves around our two serial killers, an emotionally damaged detective, and two of the most recent victims. It can get a bit confusing at times but the wa
Post a Comment
Read more

The Worst books I read in 2015 With the good comes the bad. I had my post about the best books I read in 2015 and that was a really hard decision.The worst book I read was easy, I thankfully only read three books that rated a 1 star review.  I tend to not pick books that I know are going to be utter crap. The books that I really didn't like were do mainly to the R.I.P. challenge . I tend to be more open to trying different books because most of the great horror novels I have already read.  So let's get to this shall we. I am going to put out the horrible books I read and if you like them, I am sorry if this makes you unhappy. I am honest in my reviews and try not to attack the author in anyway. My least favorite book not only of 2015 but I can safely say of all time is Haunted by Chuck Palahniuk. This was the first book I have read by him and from the reviews I have read people either love this or hate it. I hated this book. I didn't care for the movie Fight
Post a Comment
Read more 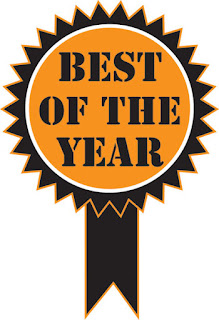 Well I will be honest, one of my goals for 2015 was to set aside more time to read those hardcovers I love so much. That kind of fell through this year. I didn't get all the books read that I wanted to. I also had less movie reviews on my blog this past year. We went to the movies once or twice this year but I didn't review them. The only reviews I did were for my Halloween week so I have a few goals this year. Goals: This year I want to get caught up on the Dresden Files series. It pains me to get caught up because then I have a wait for the next book but it will have to happen at some point why not this year. I also want to try to work in a re-read at some point. I have thought about re-reading The Dark Tower series this year just in audio book form. I have also wanted to re-read all of Jeffery Deaver's books but I just keep putting it off. Maybe this year I will at least start a re-read. This year I am looking forward to a bunch of DC Comics's movies as
Post a Comment
Read more

Happy New Year!!! This year is going to be Legen... Wait for it...dary!!! It might be, who knows, but I think I should stay positive. It is also  fitting  with the Barney Stinson Gif I chose. 2015 was Awesome in many ways but like anyone there were definitely ups and downs.  I'm not going to focus on those low points of my year and hold on to what is amazing in my life. It may sound cheesy but the best thing in my life is my wife and kiddos. My son started Kindergarten this year and I was more scared than he was. He loves school and is doing so well I am constantly blown away with how smart he is. My beautiful daughter is 2 and the  cutest , funniest little girl I know and she makes me smile with what she says. One of the best parts of my day is coming home from work and seeing her face light up when I come through the door and she comes running across the  apartment  to give me a hug shouting "You're home Daddy". No matter what kind of day I have had my li
Post a Comment
Read more
More posts