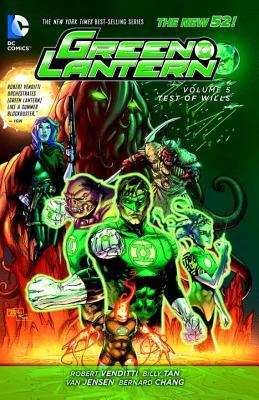 I'm just going to say it. I miss Geoff Johns. The Green Lantern story has kind of petered out in the last few volumes. Nothing against Robert Venditti but I have been underwhelmed. The last book dealt with the end of the universe because the light energy that the rings us is finite and when the energy runs out the universe is destroyed to be reborn. This story could have been amazing but I couldn't get through it fast enough so I could move on to something else.

This book deals with the aftermath of refilling the reservoir and now having to figure out how to police the universe without ending it in the long run. The Corps is rebuilding on Mogo the new headquarters of the Green Lantern Corps. and a race of shape changing beings are trying to destroy the corps (shocker) and find a way to be the most powerful creatures whom ever lived. We get to meet a few new characters in this book that look like they could be some regulars in this series in the future. We also get to see a changed much more mature Hal Jordan which was both odd and nice.

It took me forever to get through this book. I just couldn't stay interested in it and that is saying something because I usually can't put a Green Lantern book down. The art work is very well done which kind of saved this from being what I would consider a total loss. The action scenes were great and the amount of detail in each panel was impressive. I really hope the story lines gets better. We do get a nice family moment for Hal at the end of the book and some quality time with Hal's younger brother which was nice but this and the artwork are the highlights of the book.

I have thought a lot about how to rate this and I have to say that this only ranks 2.5 stars out of 5. I was really disappointed and my interest in this series is waning a little bit. I will round up to 3 stars for the purpose of the review sites I'm on. My only hope is that Geoff Johns returns to Green Lantern at some point. The fans got him to go back to Aquaman why not another run on GL.
Graphic Novel