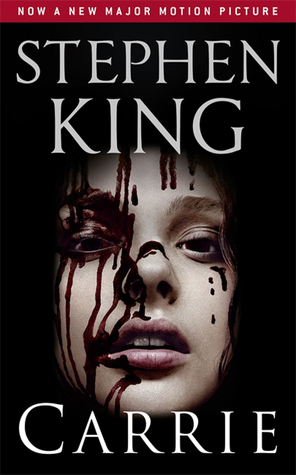 I have put this off for far to long and I can't think of a better time to read this than during the R.I.P. challenge. For one of Kin'gs earlier books I was really impressed with this. It is a little dated because of the time period that this takes place, and there is a reference to changing the speed on a record which no one younger that maybe 30 will get. This Is a very well written book even with the outdated references.

As a man I cannot understand what adolescent girls go through during those awkward teen years. All I can say is I am thankful to be a man and not have do deal with all the crap women do. I am not afraid to admit that I couldn't handle what women go through as a part of growing up. I have a daughter and this whole time in her life scares me to death. I was also impressed that King could write some of these scenes so well that they caused me to have such an emotional response to them.

Carrie is a very special girl. She has abilities that have so much untapped potential, but could also have terrifying consequences. Carrie is just an ordinary girl with a mother who is off the wall crazy. Carrie is bullied for the way she dresses, her mother's religious beliefs, and just being different. I can relate to this because I was bullied mercilessly when I was in school because unlike today, it wasn't cool to be a nerd and love Superheroes or to read for fun. My heart went out to this poor fictional girl and what she went through was so much worse than anything I had to deal with. I completely sympathized with her and the actions she took.

I really liked this book even though my heart broke for what Carrie was going through. There was one thing I didn't care for though. Through out the book there are excerpts from other books that stemmed from the events after the prom. All these books are fictional to fit the story of course but it threw off the pacing of the book. This also jumps from one character's perspective to another quite frequently which if you aren't really paying attention can throw you off. Now I know what you are thinking, You are reading a book why aren't you completely focused on it. Sometimes I find myself reading but allowing part of my mind wandering on other things. It happens.

These little things were annoying but not enough to really affect my enjoyment of the book overall. I give this 4 out of 5 stars. I have put off seeing the movies because I didn't want to have them spoil the book. Now I am looking forward to seeing the original and the remake to compare how close they held to the book. This is also going to be included in the R.I.P. challenge. I have already finished my pledged 4 books for Peril in the First but I love this event so much I am going to keep reading until the challenge is over.