The Nerdist Way: How to Reach the Next Level (In Real Life) By Chris Hardwick 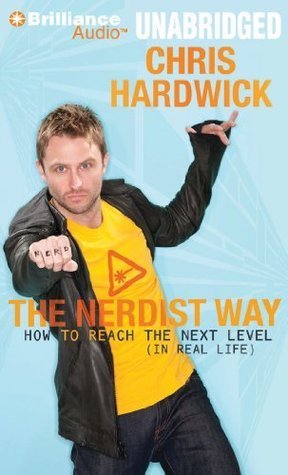 I, am a Nerd. It shouldn't come as a shock to anyone who has ever read this blog but until recent years you never would have heard me admit to it. Like most nerds my age the early years were really tough for me. I was constantly picked on and bullied until I reached college. K-12 were some of the worst years of my life because I was an outcast because I wanted to be Batman and not some sports star.

Chris Hardwick understands this and even though he will be the first to say he is not King of the nerds, he is, in my mind, one of the pioneers that made being a nerd cool. A lover of Comics, Star Trek, and Doctor Who, Chris Hardwick has created an empire around being proud of who you are and standing up for your Nerd/Geek right. This book is a self help book for Nerds looking to take advantage of what we are and make it work for us in a world that is now run by Nerds. I don't read self help books but I am a big fan of Chris Hardwick. This man has a crazy work ethic running the web site Nerdist, the Nerdist Podcast, Hosting the Talking Dead, hosting the pseudo game show @Midnight, and doing a stand up show all over the county.

This book breaks down the many steps Chris used to pull his life out of the crapper and bring it up to what it is toady. Chris has little activities throughout the book to help the reader figure out some of the negative things we as Nerds stress about and find ways to find the positive perspective. Chris says that the overall theme of this book is:

"Go easy on yourself, external forces trying to attack you in this world can be difficult enough, do not add to them by attacking yourself. Not only will you get that never clean feeling, but you will sabotage all of the good things you are working for ans absolutely deserve".

Chris was the host of Singled out back in the 90's and stardom seemed to take a toll. It took a dig from Daily Show's John Stewart to wake him up and turn his life around. This book is all about that change he made to better himself. He really had some great advice that touched home with me on several topics. The funny part about this is that my wife has told me some of these things for years and when I was telling her about this book she said "Well maybe you will listen to him". It was funny and another reason I love my wife.

This book is exactly what I needed right now in my life and it was just pure luck that I got it. Thank you Chris Hardwick for making Nerds cool. I am so happy for my son that this time period allows for someone who loves super heroes to not be the butt of jokes and torture from bullies like it was when I was younger. I loved this book and will return to it for future re-reads as well as use his activities to better myself in those times of need.

I'm not going to lie, I'm a fan of Chris Hardwick so it should come as no surprise that I give this book 5 out of 5 stars. It's not just because I'm a fan that leads to the 5 star rating. The advice is sound and helped me realize that I needed to get a grip on my anxiety and work towards getting past it. It was also great to hear how his life hit bottom and he was able to fix things and be successful. My life is no where near bottom but there are things that could be better like in anyone's life. It is nice to know that there is hope that I can turn those things around. I loved this book. Thank you to Chris, and Nerdist who have been my source for the news I want all in one place. Everyone has probably been asked or asked " If you could have dinner with anyone who would it be?" I have a top five list but Chris is on it. I think it would be great to sit down and just talk with as it is on his podcast.
Comedy Self Help