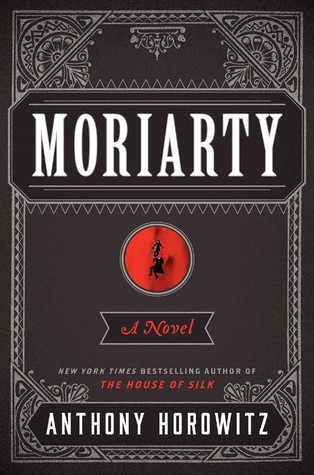 I'm going to be really honest, when I first started reading this all I saw of the summary was that is was the next installment in Anthony Horowitz's Sherlock Holmes books and it was about the events after Reichenbach Falls. I was really excited when I saw this was out and was fortunate enough to get this for Christmas. When I started reading this I kept wondering when Sherlock was going to enter this story. Well, he doesn't just to let you know in case you are like me and only read the very beginning of the summary. So if you are like me, here is the full Goodreads description,

Internationally bestselling author Anthony Horowitz's nail-biting new novel plunges us back into the dark and complex world of Detective Sherlock Holmes and Professor James Moriarty--dubbed "the Napoleon of crime"--in the aftermath of their fateful struggle at the Reichenbach Falls.

Days after Holmes and Moriarty disappear into the waterfall's churning depths, Frederick Chase, a senior investigator at New York's infamous Pinkerton Detective Agency, arrives in Switzerland. Chase brings with him a dire warning: Moriarty's death has left a convenient vacancy in London's criminal underworld. There is no shortage of candidates to take his place--including one particularly fiendish criminal mastermind.

Chase is assisted by Inspector Athelney Jones, a Scotland Yard detective and devoted student of Holmes's methods of deduction, whom Conan Doyle introduced in The Sign of Four. The two men join forces and fight their way through the sinuous streets of Victorian London--from the elegant squares of Mayfair to the shadowy wharfs and alleyways of the Docks--in pursuit of this sinister figure, a man much feared but seldom seen, who is determined to stake his claim as Moriarty's successor.

Riveting and deeply atmospheric, Moriarty is the first Sherlock Holmes novel sanctioned by the author's estate since Horowitz's House of Silk. This tale of murder and menace breathes life into Holmes's fascinating world, again proving that once you have eliminated the impossible, whatever remains, however im- probable, must be the truth.

Well that was lengthy, my review is over Goodreads took care of that for me. Just kidding, I will however skip my own summarizing and move straight to the review. This was a really good book even though  I went in with the wrong expectations. This flows just like a Sherlock Novel and the story was really engaging. The ending had a great twist that I didn't expect and I should have. I wont spoil anything but the twist was right out there plain as day and I never put the pieces together. Once it was revealed I felt like such a chump that I hadn't seen it coming. Bravo Mr. Horowitz, you got me and that isn't easy.

As great as this book was I do wish there was actually some Sherlock Holmes in it. There are a bunch of characters from early Conan Doyle Holmes stories which was fun to see. I give this book 4 out of 5 stars. Had I not been an idiot about what all this book was about and gone in with different expectations this would have been a 5 star book. I still really enjoyed it and would recommend it to any Holmes fan, just know there isn't any Sherlock and Watson in this one.