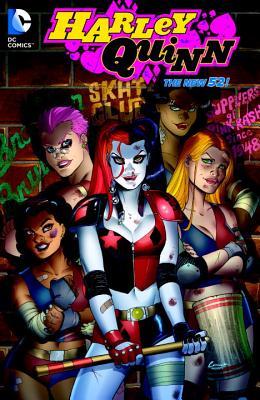 I think I am going to make this Joker week. I started this week with Joker: Death of the Family and now here is my review for his ex best gal Harley Quinn. I have to thank the people at Edelweiss and DC Comics. I got this as an advanced reader copy and I enjoyed this book. Ever since Harley Quinn broke away from the Joker and became part of the Suicide Squad her character has become really interesting. Of course she is goofy and crazy as she is in the Batman comics, but she has begun to get this strength about her. I really liked her in the Batman comics around the Death of the Family story. So when I was chosen to read this for a review I was really excited.

This is a pretty good book. I seems like a collection of short little stories instead of one long one. We get to see Harley in a no rules fight to the death demolition derby as well as being trapped on an island of people who worship the Joker. That was a weird story, oh yeah and did I mention that Harley rescues Power Girl and tries to convince here that the two of them are a super hero team? Overall the book was goofy and childish, but a lot of fun to read. It was nice to see a book all about Harley for a change. She has always been with someone as more of the sidekick role.

Sadly there really isn't much to say about this book which I haven't already said. I liked it and will have to go back and read Vol 1 then on to the next when it comes out. I will keep up with this series but on my priority list it is a little low. I give this book 3.5 stars out of 5 but for the purpose of other review sites I decided to round up to 4. This is a fun quick read.
Graphic Novel