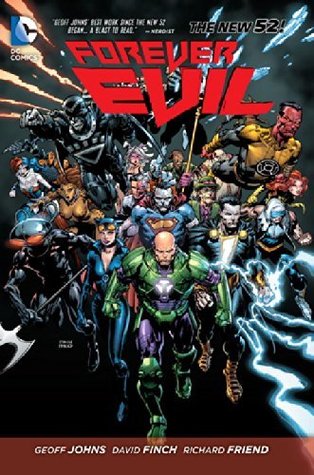 I will be honest, I didn't know anything about this book. I entered a giveaway to win it because I love comics but other than that I really didn't plan on reading this had I not won it. Had I known it was written by Geoff Johns I would have given this a look sooner. The only reason I wanted to read this was (**Spoiler Alert for Nightwing comics**) to see how Nightwing is unmasked and exposed his secret identity to the world. (Spoiler over)

Looking at the cover of this you would think this is all the villains against all the super heroes. This would be the wrong impression. The Crime Syndicate has come to our Earth to take over the planet because theirs has been destroyed. The Justice league is said to be dead and the only resistance to the Crime Syndicate and the villains they have recruited are Lex Luthor and the few villains he has talked into following him. This was a really great concept, we get to see a different side to Lex that I'm not sure he even knew was in the cold calculating brain of his. Just as Lex is building his team Batman and Catwoman show up. I almost cheered out loud. Not only am I loving the story of villains  fighting for the safety of our planet but her is my favorite superhero fighting along side them!?!?

The story was great and this is a one shot collection which wraps up almost everything in one volume. There is a little bit of a setup/cliffhanger at the very end but you can be satisfied with the resolution at the end of the book and not have to worry about waiting for the next collection. I couldn't stop reading this book. I read it in mostly one sitting. I have kids so it is impossible to sit down let alone read with out interruptions. I loved the whole story and really wish there was more to it. I kind of miss the old comics that would tell you what book will continue the story. If there was a little box at the very end that said something like Continued in Justice League Vol 6 I would have loved that. Then I would have known which book to read next instead of playing guess the next step.

The story was non stop action from the very beginning to the very end and the art work is very well done. I give this 4.5 stars but will round up to 5. I loved this book and I'm so glad that I did my search to find out what story line had the answers to my Nightwing questions. So far I have read some great stories this year and I hope to keep my streak going with the graphic novels I am trying to catch up on.
Graphic Novel