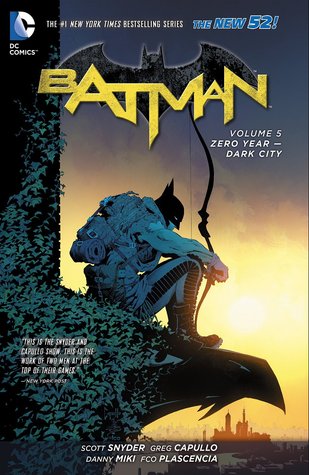 I have probably said this before but Scott Snyder is a genius. Like Geoff Johns Snyder has this way of writing an amazing story that is complex and thrilling over and over again. I have loved every volume in the Batman series since Scott Snyder took the reigns and I don't ever want to see him stop. I will admit that I had a hard time getting into the first part of Zero year because I just didn't care for some of the changes to Batman's origin story. The writing was great and there were a lot of things I did like but I was worried that this book would be a struggle to get through. I couldn't put this book down and it is a long graphic novel.

This story took off from the very beginning and I loved every page. Not only was the story amazing but I have to give credit to Greg Capullio, his artwork is just perfect for the story. The detail on every page was very clear and helped pull me into this destroyed Gotham city. Batman is also trapped in the city with no access to his gadgets and suits and he has been through a lot. Greg Capullio created this MacGyver style Bat-suit out together with a torn cowel spray paint and what was left in his utility belt.

The one thing I don't like about this re-telling of Batman's early years is that Bruce and Jim Gordon are angry with each other and Bruce resents him because he feels Gordon was paid off and kept things around his parents murder buried. One thing I have always liked about the Batman comics is that friendship or bond between the two characters. Gordon was the one who protected Bruce on the night his parents were killed and wrapped his fathers coat around his shoulders. Gordon was the the one to help Bruce take in Dick Greyson when his parents were killed. He and Bruce worked to make sure Dick was looked after during the most difficult time of his life. Because of all of this it was really hard for me to see Bruce so angry at Gordon.

The Riddler has taken over the city and holds the people of Gotham hostage until someone can stump him with a riddle. Needless to say this is a futile exercise by the normal people of Gotham. While this is going on Batman is working with Gordon and Lucius Fox to try and locate exactly where the Riddler is hiding. This was a great story and there are so many great goosbump moments in this book that I give this a full 5 out of 5 stars. You need to read Volume 4 first but this book is a must read for any Batman fan.
Graphic Novel