The Last Apprentice: Fury of the Seventh Son by Joseph Delaney 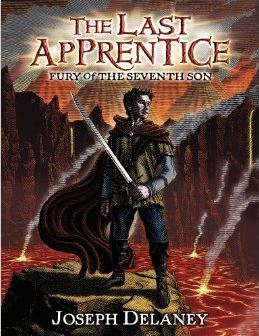 Fury of the Seventh Son

This is it, the end of a great series. The ending could have been a little stronger but I was pleased with how well this wrapped up. From what I have read Joseph Delaney is starting a new trilogy with Tom that I am quite anxious to get a hold of.

As this is the last book in a series of 13 books there is little I can say without ruining the story for someone who hasn't read it, but I will try. Tom has come a long way in his training with the Spook and he has been working solo on random jobs around the county as the spook gets up in age. Tom has worked hard to prepare himself to face the Fiend and keep him from coming back to power.

This was a good book, not the explosive amazing ending I was hoping for but still hard to put down. I have read a lot of books and quite a few series so there was a level of expectation I had with how this was to end. Once I heard there was another trilogy beginning I started to wonder if this was half wrap up and half intro to the new books. The ending was a little disjointed at times and seemed to have to come back around at one point to fill in information that got skipped. At the same this tied everything together pretty well, even the book Slither got tied in by the end of this book which I was glad to see there was a purpose to that. I was happy to leave this series as it was.

I think I have rambled enough, I liked this book and this was a great series. This book gets  4 out of 5 stars for me. The series would be a 4.5 and I am so glad I stumbled onto this. I even got my wife to read these ad she enjoyed them just as much as I did. We also had a lot of fun talking about it as we read these books. I would recommend these to anyone who is looking to a great adventure story. It doesn't read like a Young Adult book at all and at times got kind of violent. I loved it.
YA Fiction