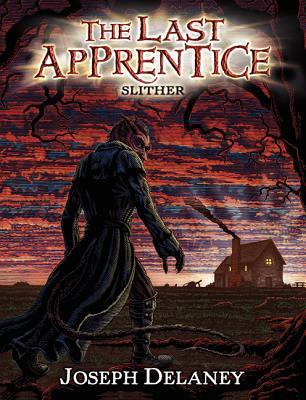 I took a little break from this series but I'm ready to finish and find out what happens to Tom, Alice, and the Spook. This is listed as the 11th book in the series but really it doesn't fit in the story line. Like the 9th book, Grimalkin the Witch Assassin, this is a stand alone story. It almost seems like the this was a different project that was rolled into the series to draw it out a bit. This story has very little to do with Tom and his quest. It takes place in a different realm where they have never heard of Spooks.

This book is about a creature who lives off the blood of others and makes a deal with a local farmer. He will leave the farmer and his family alone if he will allow Slither to feed from the animals from time to time. Something happens tot he farmer and we learn that as long as Slither gets his two youngest daughters to safety then he can have the oldest.

There are a few references to Spooks and we have a pop in from one of the bigger characters to help move the story along. This was an ok book but I have to admit that I was glad to finish this one. I kept going because I wanted to know how this book ties in only to find it really doesn't. The story is kind of slow and most of this is a repeat of the plot line over and over.

I'm kind of torn as to how to rate this book. There were some parts that held my attention, but overall I felt let down. I was anxious for this book to be over so I could get back to Tom and the Spook. I need to know how Tom will defeat the Fiend and if Alice can remain in control of her own powers. The prophecy that has been set in this series raises some interesting questions and this book just made me aggravated that I wasn't getting a step closer to the answers I'm looking for.

I had trouble trying to decide just how I was going to rate this book. I kept teetering on the fence between a 3 and a 2 star rating. The more I think about this book the more aggravated I am getting by the whole thing so I have decided this only a 2 out of 5 star read. If you are not as crazy and stubborn as I am I would suggest just skipping this book in the series. At this moment I don't see the purpose for this one. Maybe something will be revealed in the final two books that will make this one seem more important but I can 't see it. I don't mean to be harsh on this because the series is great and I have really liked the writing. Delaney is a great writer and his style is very well done, I just didn't care for this book. Even the Grimalkin book which felt like a deviation from the series was enjoyable. This fell flat for me.