Halloween Hangover and RIP Wrap up

Sadly another Halloween has come and gone. I had a blast this year and I really hate to have it behind me. I did feel like I needed a few days before I wrote this post so I could recoup from everything and really put thought into this post. I've got nothing.

Where I live the weather is always against us. Last year it was raining and this yes the temp was 37 degrees Fahrenheit and the wind was unforgiving. It really brought back those memories from my child hood where the only thing you could see of your costume was your mask because you were bundled under layers and coats. My son was lucky enough because he was Spider-Man we were able to put his costume on over his clothes, then a jacket and then his Spider-man hoodie over that so you still got to see his costume. He is 4 so we were only out trick-or-treating for maybe a half hour but he wanted to eat some candy right away. My poor daughter is 1 and she was going to be Bat-Girl but it was so cold we bundled her up and was Mobi wrapped to my wife for the little while we were out. She didn't get any candy but then again she doesn't need sweets just yet.

I am beat, even though we weren't out for very long it was tiring. Lots of excitement leading up to the night. We did do more Pumpkin carving after my initial post. My wife did a fancy patterned carving and you saw my throw back to the traditional. My kids painted there's. Our pumpkins looked great all lit up. 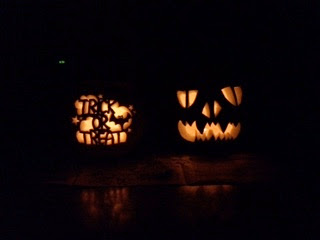 The Readers Imbibing Peril challenge was a lot of fun this year. I of course added my movie reviews for the peril on the screen part of the challenge. These are the movies I reviewed for the challenge if you weren't around for my Halloween Week reviews.

Also with this challenge I reviewed a few shows. Here is that llist:

I pledged again to do the Peril in the First level of this challenge. That is a whopping 4 books. I actually read a lot more than that. Here are the books I read for this challenge.

I had a lot of fun with this challenge and Halloween. I'm excited for the colder weather becuase I love the Fall and Winter. Yet I am already looking forward to next Halloween. Hope those of you who celebrated this wonderful holiday had a lot of fun.
RIP