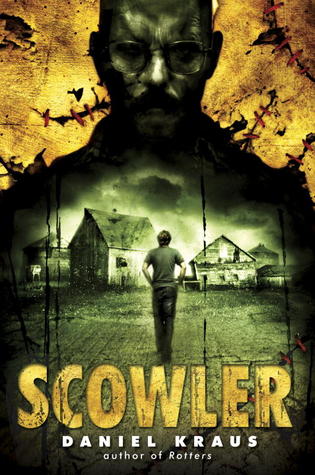 This fall I haven't had this big list of horror books to-read for the Halloween season. The RIP challenge finally started up for this year and I really didn't have much read to go.Thank you to my library and the Overdrive app on my iPhone to supply me with a steady stream of audio books. I decided to pull up the Horror genre and see what was available. Right away this cover caught my eye. Reading over the summary I started to think this was really interesting and I was going to give it a shot. Again, I had no idea this was a YA title until half way through the book so my trying to aviod YA titles for a little bit wasn't going so well.

Here is the Goodreads description:

Nineteen-year-old Ry Burke, his mother, and little sister scrape by for a living on their dying family farm. Ry wishes for anything to distract him from the grim memories of his father's physical and emotional abuse. Then a meteorite falls from the sky, bringing with it not only a fragment from another world but also the arrival of a ruthless man intent on destroying the entire family. Soon Ry is forced to defend himself by resurrecting a trio of imaginary childhood protectors: kindly Mr. Furrington, wise Jesus, and the bloodthirsty Scowler.


This book was nothing but random trips to crazy town. The flashbacks that popped in and out of the story were not done well. Most of the time it caused the flowing action of the story to just stop. Its like if you were running and feeling good them crashed into a brick wall. It would take awhile to get going again and that is how I felt about these.  I understand the author't desire to make use understand just how bad things are for Ry but really I felt it was more crazy filler.

The other thing I didn't care for with this book was that I didn't like any of the characters. They were all horrible and ranged from both sides of the spectrum. They were either terribly pathetic or horribly insane. There wasn't a middle ground and made it really hard for me to care what happened to them. I actually found myself counting down sections to the end of the book because I just wanted it to end. I should have put it down and moved on to something else but this was short enough that I just struggled through.

I may not have had anything great to say about this book but I didn't hate it. I was just disappointed with this one. I give it 2 out of 5 stars. Sadly I judged a book by its cover and was let down. One last note as more of an FYI. I'm not a teen and haven't been one for a long time. I didn't realize this was a teen novel because some of the events that happened were written in graphic detail. It wasn't something I would expect from a YA novel but I might just be out of touch with what teens are like these days.

I will be including this review in the RIP challenge because that is what I read this for. I have already read my pledged 4 books for this challenge but this is my favorite time of year and I will cram in as many horror novels as I can until this is officially over.