Fear Nothing by Dean Koontz 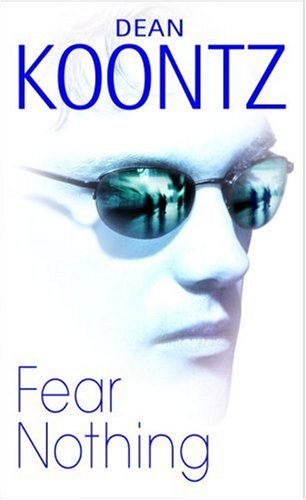 I have only read a few books by Dean Koontz but the ones I have read were awesome. Tic Tock and Life Expectancy were great books and I couldn't put them down. My father-in-law and I were talking books one day and I got on my high horse about how awesome the Stephen King book I was reading was and he said this book was really good. I put it on my to-read list and forgot about it. Well tis the season to be scared and I needed a new book to read for the RIP Challenge. I figured I would give it a read. I wasn't a fan.

I don't know what my deal is this year but all but one of the books I have included in the RIP challenge have been disappointing to say the least. At leas this book had likable characters that I could at least be interested in seeing how their stories played out. The rest of the plot just dragged on for me. I couldn't wait to get to the end of this book. There wasn't a lot of action in this book which made the downtime seem so much longer.

I honestly don't have much to say on this book so I will keep it short. The story seemed a bit cliche with the way the plot played out, and the ending was anti-climactic. I give this 2 out of 5 stars. I really wanted to like this book. It was just so odd and dull that I struggled to get through this one. There were also a few grammar issues that kept driving me nuts through the whole book. This will be included in the RIP challenge. which there is still time to join in on if you are so inclined.