The Walking Dead Vol 15: We Find Ourselves by Robert Kirkman 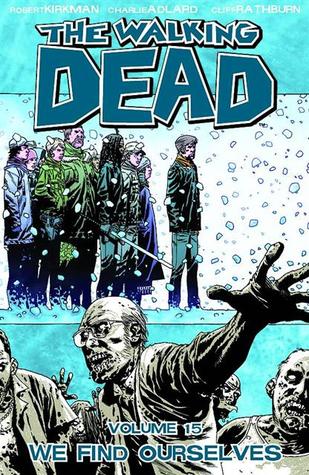 If you read my review of Vol 14 then you might remember me saying that it would be easy for Robert Kirkman to make a purely character driven story. This is that book. It wasn't even a great character story. Again Rick was really big into the monologues. A lot happened in the last book so I understand taking a breather to let our group recoup a bit and take stock after a huge Zombie attack. I just wish there was a better story to this book instead of a lot of complaining.

To top off my list of complaints, there wasn't a single Zombie attack. There were one or two to loose their heads but I thought the Walking Dead was about zombies and not my attention span. There are more Zombies on the cover than in the whole book. I struggled to get through this one. I kept finding things I needed to do instead of read. I was let down by this book, there are ways to make a character driven story interesting. Ask Stephen King and Jeffery Deaver. You could ask George R.R. Martin but I think he uses to many characters to keep straight.

When I started to write this review I had every intention of giving this book 3 stars, but as I write and dwell on this book I have to drop it to 2 out of 5 stars. I still love the series and it is getting bigger and better but this one just flopped for me. I will say that the show has done a couple of episodes that have been purely character driven. These were done much better and were a lot more interesting. I think Kirkman has been able to make changes in the show that he might have wished he would have done in the books. It could also be that the cast of actors in the show are amazing and great at becoming these characters.
Graphic Novel Horror Zombie