The walking Dead Vol 13: Too Far Gone by Robert Kirkman 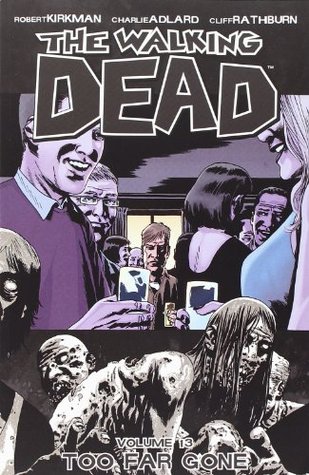 When last we left our band of zombie slayers they had just stumbled upon a community or people living behind walls to keep the undead out. We've been through this before. For those who have read the series all I have to say is "Woodbury". As much as everyone wants this new community to be the real thing, all of them are skeptical and plotting to get their weapons back just in case. Rick has begun to settle into his old job as Sheriff in the new community but still fears that something is coming and that this place really is too good to be true.

This book took an interesting turn. As a reader I really want these characters to find someplace safe were they can settle down and work towards getting their lives back. However, that would mean the series is over and I'm definitely not ready for that. They have been through so much in their little fictional world that even I think this is too good to be true. Rick may be settling into his role but with it brings back that stress of being a leader. Violence takes over at some point and causes the citizens of this new community to be frightened of these new comers.

There are some zombie attacks in this book, enough to keep it interesting at least, but this book mainly focuses on what evil humans are capable of. You would think that living in a post apocalyptic world would make everyone happy to see another human.  Instead it has turned some into evil violent creatures who enjoy the pain and suffering of others. I won't get into specifics because I don't want to spoil a panel of this book.

I enjoyed this book and the story has really picked up again since the last book, Life Among Them. Having this new community helps bring the suspense back to these books and I couldn't put this down. It took hlaf the time I usually take to read one of these. I will get this a solid 4 out of 5 stars. On to the next book and I hope this plot momentum keeps going.
Graphic Novel Horror Zombie