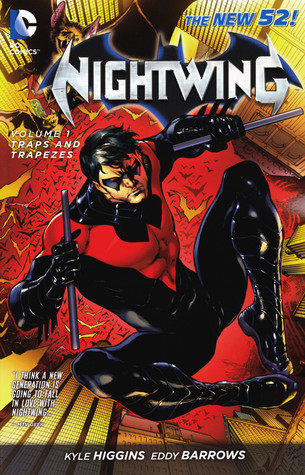 You wouldn't know that Nightwing is my second favorite hero right behind Batman, but how long it took me to get around to this book. I loved Dick Grayson stepping into the Role of Batman when Bruce disappeared. That had some of the best story lines I have read in the Batman comics, but I knew it would be temporary. Bruce Wayne is the only Batman and I was anxious to see Dick Grayson back in the Black and Blue Nightwing suit. I was a little surprised to see the red instead but it makes sense. When he first hung up the Robin suit and became his own man the costume fit the times. The first suit was a blue and yellow with feathered wings across the chest. Then DC Comics redid Nightwing's series. #1 spun out of the Batman Legacy story line. This saw the edgier modern black and blue Nightwing suit. So why wouldn't DC Comics bring Nightwing back with a new look. 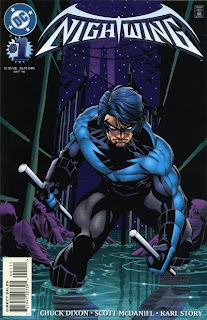 I was so excited to finally get around to reading this. I kind of held off to save the best for last in my attempt to catch up on the New 52. I haven't read any of the Superman stories but that is more because I am not a fan of how he is written in the Justice league comics so I have avoided it. In this book we not only get to see Dick Grayson back in the Nightwing suit, but we get to see his old life in the circus come to Gotham.

Mr Haley has been murdered and he left the circus to Dick. Catching up with old friends and trying to get the circus back on track after this tragic event is not all Dick has to put up with. There is a hired assassin out to kill him.. Little does the assassin know he is dealing with Nightwing. The writing was really good and so was the artwork. Some of the covers for the individual issues were just amazing. 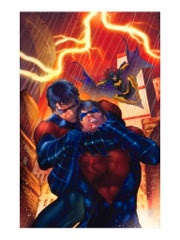 As you can see from this cover there is a guest star who makes an appearance. I love when Batgirl and Nightwing work together. Before I stopped reading comics there was a romance getting stronger between the two of them again and I kind of miss that. Things are different now but they still work really well together. I loved this book and can't wait to get then next volume so I can catch up with Nightwing. Definitely giving this book 5 out of 5 stars.
Graphic Novel