The Last Apprentice: Rage of the Fallen by Joseph Delaney 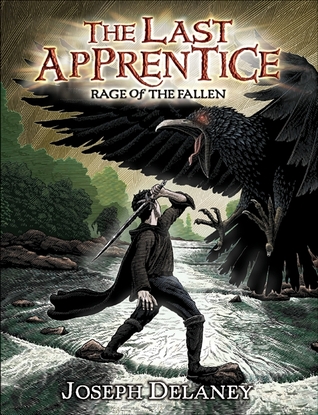 Rage of the Fallen

There is a lot that happens in this book. The most important is that some of the plot gets wrapped up a bit. Tom, the Spook, and Alice are once again looking for a place to stay while the war continues at home. They find there way to Ireland where they encounter a new type of evil that the Spook has never even head of before. While trying to figure out what to do about this new ghostly problem Tom's dreams are becoming haunted more and more.

There is so much that is crammed into this book. The introduction of a new type of ghost, they run into a clan of Goatmages, and the goddess of witches is after Tom in his dreams as well as the real world. While all of this is happening the Blood Jar protecting Tom and Alice from the Fiend becomes damaged. The time to confront the Fiend is quickly approaching and Tom is feeling the heavy wait of what lies ahead. This was a much more solid story than the last two, but still had some areas that could have been a bit more interesting.

I really like seeing how Tom changes with each new book. The Spook's worry is steadily growing as Tom begins to use bits of the dark in his Spook training duties. Times are changing and the Spook is going to have to adjust a bit. Tom also worries that these little bit of the dark might turn him away from the good he does and change his life forever.

I have not lost interest in this series but I must admit that I am not as excited about it as I was when I first started reading them. There is some repetition in the stories, and they don't seem to be as impressive. I might have gotten used to the style of Delaney's writing so the newness and excitement has worn a little. This was a good book but the highest I can give it is 4 out of 5 stars. This is a solid series and I have enjoyed every step of it so far. I just hope that they begin to pick up since I am just a few books away from the end.
YA Fiction