The Fifth Witness by Michael Connelly 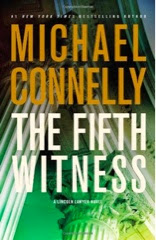 The next book in my attempt to catch up on all of the Connelly books I have missed is The Fifth Witness. This book is a Mickey Haller story and as much as I like Connelly, I wasn’t as impressed with this one. Maybe it was because I loved The Reversal and I kept comparing this to that one the whole time. I still like this book but the level of suspense that was in The Reversal just wasn’t in this.

Haller is back to being a defense lawyer but instead of working out of his Lincoln town car he has sprung for an office a few blocks from the court house. He has decided to move on to real estate cases involving foreclosures. Not the same attention getting cases as murders, but Haller is looking to settle down a bit.While working on a case the man who is denying his client the chance to save her home winds up dead and she is the prime suspect. Haller has to pull out all of the stops to try and defend a woman that has evidence stacking against her. This is your traditional court room drama and I was losing interest from time to time.

There were only a few things that bugged me about this story. I really like the character Mickey Haller, but he does have some shady morals sometimes when it comes to winning a case. Everything he does is legal, but there are times when even I wish I could smack him for the dirty tricks he pulls. I know lawyers do this in real life so it’s believable, but now that I have read a book with him on the prosecution side I really wish he would go back to that. There is a lot of time spent in the court room which kind of waters down the suspense. The Reversal had a lot of the investigation that you find in the kind of mysteries I like. To be fair I think the reason behind the Reversal having more to do with the investigation is because of it being a cross over with Bosch.

The best part of this book is the ending. Connelly really pulled out all of the stops and, court room drama aside, this was intense. As all of the pieces begin to fall into place I could follow Haller’s thought process because I was just a few steps ahead. With one little reveal Connelly had me putting every little detail from the trial together like a ouzzle and it was really engaging. I loved the ending and it was worth all the slow moments once I got there. If you are a fan of the Grisham style novel then I would recommend this to you. This was pretty good and Connelly did a great job with the twist at the end.

Even though I wasn’t blown away by this book I still really enjoyed it. Slow parts aside I think this deserves 3.5 out of 5 stars. Since Goodreads and Amazon don’t do half stars I am going to round those up to 4. I can’t wait to move on to Connelly’s next book which brings me back to the Bosch series. I’m so glad I decided to catch up on these books.