The Drop by Michael Connelly 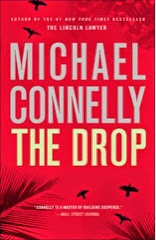 Harry Bosch is one of my favorite detectives. He is on the list with Sherlock Holmes, Batman, and Lincoln Rhyme. I love each character for different reasons, and I love Bosch becuase he is written in a noir style. He reminds me of Humphrey Bogart in Casablanca. It has been a long time since I have read a Bosch novel and this was like stepping into fond memories.
Bosch has been working different aspects of the police force now that he has his preteen daughter living with him. Bosch is working overflow cold cases. When DNA from a cold case comes back form the labs, if there isn’t an officer to work it, they fall to Bosch. He is desperate for a case and not only does he get his wish, but two cases fall in his lap. The first case is the murder of a girl from 1989, the DNA came back belonging to a man who would have been 8 years old at the time. Thinking this has to be a mix up at the lab Bosch is tasked with investigating the mix up and make sense out of these results.
While investigating the cold case a man whom Bosch thought would not stop to pee on Bosch if he was on fire, asks him for his help. Former police chief, now Councilman, Irvin Irving has been Bosch’s longtime nemesis and he is asking Bosch to investigate the death of his son. Irving's son has either Jumped to his death from the balcony of a hotel suite or been murdered. Irving wants Bosch to work the case because to Bosch “Everyone counts, or no one does”. Irving knows that no matter how much Bosch hates him, he will work the case to the best of his ability and follow the facts.
I loved this book! Both cases were interesting, but I did prefer the cold case more. It had so much more mystery behind the whole story that I kept waiting for Bosch to go back to investigating that case. I kind of hate the character of Irvin Irving so I really didn’t care to much if his fictional son jumped or was pushed. That story had its moments but it seemed like the background story more than what it was meant to be.
Connelly did an amazing job with the writing on this one. It read so fluidly that I didn’t realize how much I had read until I stopped and looked back. The story may not have the most action, but it grabs you from the very beginning and kept me glued to it all the way through. Bosch has never let me down when it comes to an interesting story. He is the kind of character I can relate to because even though I am happily married with two amazing kiddos, I'm an introvert. Had my wife not brought me out of my shell I would still be the loner bachelor cooking meals for one and never leaving my apartment except for work. Even though I'm not like that anymore it is still part of my personality and that helps me step into Bosch’s shoes .
I finished this a while ago and I have been giving this rating some thought. When I finished it I thought immediately that this is 4-4.5 stars. However, I have not stopped thinking about this book since I put it down and moved on. It has stuck with me and even though I have moved on, I can’t wait to get back to the next Bosch novel. For this reason I am giving this book 5 out of 5 stars. It may or may not make my favorites list, but I love a book that sticks with me and makes me think long after I have finished reading it. This is one of those books and to me deserves highest marks. Go read this and see for yourself.
Mystery Suspense