Aquaman Vol 4: Death of a King by Geoff Johns 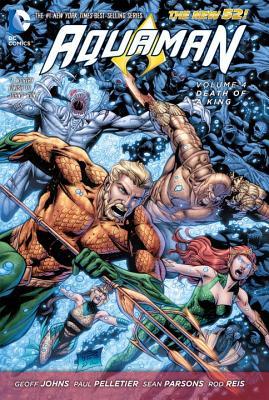 Death of a King

I never thought I would say this but Aquaman is Badass!!! Geoff Johns does an amazing job of making a character who was made fun of by other comic book heroes cool. I was never a fan of Aquaman before the New 52, but now I look forward to the new volumes coming available at my library, or being offered on Netgalley or Edelweiss. I can see why Aquaman was made fun of for so long, he can talk to fish big deal, Superman has a bunch of powers and Batman has impressive gadgets. Since the New 52 Johns has made Aquaman a strong likeable character and that seemed like an impossible task.
In Volume 4 Aquaman is dealing with the aftermath of Atlantis’s attack on the world. He has been made king of Atlantis and has to deal with not only the public’s unease towards the people of Atlantis, but now there are futuristic weapons all over the ocean floor being stolen and sold on the black market. On top of all of this some of the citizens of Atlantis are not happy with their new King. They are anxious to break out his brother, the former king, from prison and boot Aquaman out. Just when the stress of being a new king and cleaning up someone else’s mess seems like enough, we meet the dead king. The original King of Atlantis has been awakened and wants his throne and his people back.
I felt the story in this book was great. There were a few slow spots in the beginning, but then we get some amazing battles and answers to our questions. Aquaman has to find out what is behind the old king of Atlantis which leads to some interesting new about his family's past. While trying to learn all he can Scavenger has a fleet of submarines attacking Atlanits in hopes he can cash in on even more weapons .

Not only is the story very wel done but the art work was amazing.  Paul Pelletier did an amazing job on this book. There was so much detail in his work, even in some of the smaller panels he was able to create these detailed back drops that were worthy of Atlantis. 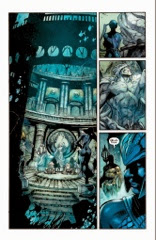 I can’t say enough good things about this book yet I am having a hard time coming up with more examples. On to the rating, I give this book 4 out of 5 stars. Really I would give this 4.5 stars but for Goodreads and Amazon I am only going to give it four. I really enjoyed this but it just wasn’t a full five stars book but it did come pretty close.
Graphic Novel