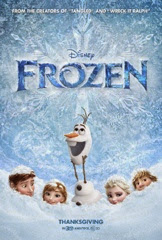 I can't lie. I really enjoy Disney movies. It is one of the many things I have never grown out of, but now I have an excuse to watch them. I have kids. I'm also secure enough in my manhood to say that I really enjoyed Tangled. At the time I was a big fan of Zachary Levi who was the lead in one of my favorite television shows Chuck. I also really like Mandy Moore, I had a crush on her way back when, so I have enjoyed most of her movies.


I had heard a lot of great things about Frozen from friends and family. I even heard a lot of great things from just random strangers. For example, on my way home from my day job I decided to stop and buy Frozen the day it came out so my wife and kids could have a special movie night while I was at job number 2. While I was standing in line to check out, this mom behind me started to gush all about how great this movie is and I was making a great choice buying it. Needless to say she was buying it also. I didn’t mind the review. This is how we get our information about what to expect from books and movies. You wouldn’t be reading this right now if it wasn’t true. The Mom did say that it was very similar to Tangled, and if I liked that I would really like Frozen.

She was right. It took me about a week to get some time to sit down and watch this once it was released, but I really liked it. This was very well written, and the little bits of humor throughout were really enjoyable. I liked the characters and the actors who played them. Olaf was really funny, and I don’t think it could have been played by anyone but Josh Gad. He just brings a personality to the character that was funny and perfect for the role. Kristen Bell blew me away with how well she can sing. I really like her as an actress, but I never would have guessed that she would have such a great singing voice. I honestly didn’t believe it at first until my wife told me she looked it up earlier. There are a few lines in the movie that when I heard Anna say them all I saw was Kristen Bell with a smirk. I could have pictured Veronica Mars saying the same thing.

I’m not a big fan of musicals if I am being honest. I tend to avoid them whenever I can, but when it’s Disney I have to at least watch it once. The music in this movie is pretty good, and I found myself humming some of the songs the next day at work. I had to stop myself and try to act cool about it as I hoped no one heard me. This was a great family movie, and there wasn’t anything too over the top that my 4 year old couldn’t handle. Brave had a scary bear that he wasn’t a fan of at first but then was fine. The abominable snowman was mean and huge but not scary or over the top. What do I want to rate this movie? Right now I will say this deserves the 5 out of 5 stars everyone told me it was. After watching it a hundred times I’m sure that will drop. My poor wife is a stay at home mom and has watched it every day since I bought it. As of now she still likes the movie; I’ll ask her again next week.


One more thing that I have to mention, why do the parents always get killed in Disney movies? When I was a kid I never thought about this, but now that I am a parent I’m shocked at home many Disney movies off the parents either right away or half way through the movie. Let me know what you think about this. I would love to really spark some conversation about Disney’s possible hatred of parents.
Movies