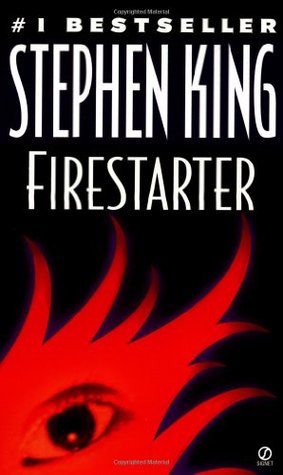 I'm a big fan of Stephen King and I would like to think I can be considered a "Constant Reader". It was only a few years ago that I really got into his books and now I am on a mission to read everything by him. Whenever I need a new book to read and there isn’t anything really grabbing my interest on the top of my to-read pile I can rely on a King novel to keep me company.

I was in just such a need and my library had this one ready to go. I wasn’t sure if I was going like this after reading the summary, but I want to read all of King's stuff so I felt it was time to read this one. Now that I have read it I am kind of torn on what I think about this book. King is an amazing writer and I have loved so many of his books, but occasionally there are those that just leave me feeling underwhelmed. This was one of those.

This book starts out with two very interesting characters; Andy and Charlie are on the run from a government like agency. As the book progresses from the start we get to learn that Andy took part in an experiment in college that gave him a heightened awareness and allowed him to make people do things and believe whatever he wanted them to. This “power” is kind of like the force from Star Wars. The agency that is after him and mostly his daughter Charlie is known as the Department of Scientific Intelligence or the Shop as some have come to call it. Honestly I must have missed the explanation on that one because I don’t remember why it was nicknamed the shop. If you know let me know in the comments below because I am curious, just not enough to re-read this book.

The beginning was actually really interesting and suspenseful. King was able to express the urgency of being chased while keeping that suspense building. We also get to learn more and more about the situation they are in bit by bit. I was really starting to get into the book and then it felt like the rug was pulled out from under me. About midway through this book it just slowed to a crawl and I had a hard time keeping interested and focused on the book. At this point King pulls away from the suspense and starts to explain all the possible “powers” children born from those they experimented on might have. Ok, I get that he is trying to show the range of things the human mind is capable of, but then there is almost a chapter about what type of sedative the Shop is going to use to try and catch Charlie. Real snooze fest for a few chapters and I think because this falls almost smack in the middle of the book all the momentum King was building was lost. The rest of the book struggled to gain that momentum it had, and it felt like starting all over again.

I really am torn on this book because I liked the beginning of this book but the ending was just ok. I think I will divide my rating right down the middle and give this book 2.5 out of 5 stars. I will round up to 3 for the purpose of Goodreads and Amazon because of the beginning. I’m glad I got around to reading this but it will not be on a re-read list for me.