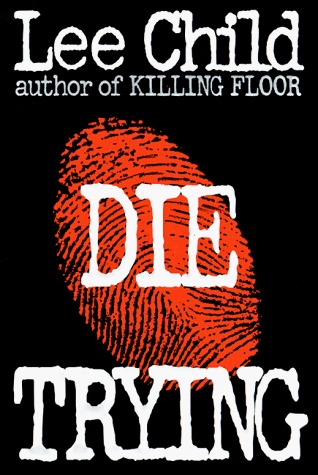 This is going to be one of those reviews that is going to be hard to write. I think I will start out with my rating, and if you really want to read while I ramble then that’s your decision. I liked this book, but I wasn’t blown away by it. I give this book 3 out of 5 stars. Jack Reacher is a likeable character, but right now I don’t see a lot of depth to him. This is only the second book in the series, and maybe I’m missing something, but it just seems like there could be more to him. The plot was also predictable. Still, it was an entertaining read.

I have only read the first two books in this series, and maybe things change later, but I noticed a formula to these two books. Reacher is a former military man roaming from town to down doing odd jobs until he finds trouble. There is a girl whom he falls for through the whole book. No home, no job and not a care in the world, but he seems to find the one town with terrorists or something that takes up at least two hundred pages.

In this book Reacher is just in the wrong place at the wrong time. He sees a woman being kidnapped and steps in only to be taken himself. The beginning of the book is character development while being driven around in a van.  I do seem pretty down on this book so far, but I enjoyed this book for the most part. I found that there was a good bit that could have been cut out of this, and it might have made it better. As I read I would just start to get interested in what was going on and then run into filler. Then it would take some time for the plot to build again. I found my mind wandered, and I missed things while listening to it.


I kept hoping that the whole book was building to this big explosive ending. Well, it kind of did but I wasn't really impressed with how it ended. Once things started to move the pace of the ending was decent. I paid much more attention to the last hour or so of the audio book. Again, I have to mention that it was kind of predictable. The overall end was predictable but there were a couple twists that I didn't see coming. Nothing as amazing as something in books I have read by other authors, but I like to think that Lee Child was still young in his writting with this book.

Now the big question... Am I going to continue to read this series? I have given this a lot of thought since I finished the book and a little bit before I finished. I like the character, but not as much as other series characters I read. The writing is good. I just wish there was a little more trimmed off this book. The first two books seem to fit a formula that makes these predictable. I think I will read one more. I will give this sereies another book before I write the whole thing off. It may be awhile before I get to book three but I will at least add it to my to-read list. Thank you for reading my whole review if you stuck it out. I just hope I wasn't all over the place to much.
Mystery