The Valley of Fear by Sir Arthur Conan Doyle 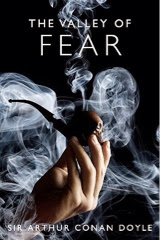 The Valley of Fear
This marks my 100th Post on my blog, and I can't be more proud to post my first Sherlock Holmes review here. I have written many reviews on the Conan Doyle Holmes books as well as many Pastiches on Goodreads and Amazon, but this will be the first here. If I couldn't post a review on a book by Jeffery Deaver or Stephen King for my 100th post, I am so glad that it will be a Sherlock Holmes review. I can't believe I have written 100 posts. It seems like just yesterday I was starting my blog and begging for followers. I might not have as many followers as other bloggers and even less of those followers I think actually read my posts, but for those that have remained loyal, I thank you. It is always nice to get comments on my posts because then I know they have actually been read and enjoyed.

I have been a huge fan of the detective since I was a child but seemed to get more into the character and stories about a year before the new BBC Sherlock debut. I have always loved Holmes's attention to detail, and it seemed the more I read the more modern day stories I found that seemed to be inspired by Doyle's work. Think about Batman, also refered to as the "World's Greatest Detective". He uses his intelect and a plethora of expensive gadets, but I have always wondered if Bob Kane was thinking of Sherlock Holmes when he started to create Batman. The USA Network show Psych also has a character who uses his keen deduction skills to solve crimes. Yes the character in Pysch is comedic and snarky, but I have also wondered if his character was inspired by Holmes. The last character I will mention, who I know is inspired by Holmes, is Lincoln Rhyme from Jeffery Deaver's novels. I have emailed Mr. Deaver in the past, and once I just asked him if he was inspired by Holme's. Deaver said he was, and he enjoyed Doyle's stories as well.

I am slowly making my way through all of Doyle's Holmes books, and I only have two left after this one. With stories like The Hound of the Baskervilles and a Study in Scarlet, I had high hopes for this one. I began reading this with excitement, and my mind geared up for whatever Doyle could throw at me. I have figured out the endings of quite a few of his stories and thought I had this one all locked up half way through part one. Boy was I wrong. Doyle has not really had these big plot twists in his stories that I had read previously. There is always a big reveal but nothing that makes me doubt the facts presented. I was blown away with the ending of both part one and two.

This book is divided. Part one really only pertains to Holmes and Watson. The second part is more a story of explination. I can't say much about part two becuase it will ruin the first. The book opens with a strange letter being brought to Holmes's attention saying that there is great peril approaching. Could this be the work of Moriarty himself? Could it be a trap set for Holmes??? Then a case is dropped in Holmes and Watson's laps. Throughout the book we are presented with facts as if Doyle wants us to figure out the ending, but he is pointing you one direction till the very end. Then the rug is pulled out from under us readers, and all of the clues we had end up having a double meaning. I was impressed, and in the short moments I had to read this I couldn't put it down.

I have decided that any fan of Sherlock Holmes needs to read this book. Doyle hasn't surprised me like this or proven me more wrong than he did in this book. I wasn't just surprised once, but Doyle did it twice. Both parts had endings that I hadn't expected, but then once I knew I began to rethink the clues and couldn't believe I missed it. For this reason and a few others I give this a 5 out of 5 stars. This has made my favorites list.