The Silmarillion by J.R.R Tolken 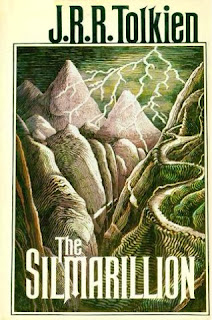 
I'm not a big fan of the sci-fi or fantasy genre, but I love The Lord of the Rings books and the Hobbit. My dad read these books to me as a bed time story when I was nine. I loved the world of Middle Earth and all the different creatures that lived there. Years later when Peter Jackson made The Lord of the Rings into a series of movies it only strengthened my love for these books and their characters.

When the first installment of the Hobbit came out it sparked talk of Middle Earth with my Dad again. He kept telling me that a lot of what is in the movie version of the Hobbit is taken from this book. He said it gives a history of Middle Earth before the events of the Hobbit and Lord of the Rings. Of course my interest was peaked, and he gave me his hardback first edition. I was thrilled because my dad and I don't talk books much these days. He doesn't have time to read, and I barely find time myself to keep my nose in a book. It was also wonderful to share in this series once again with my dad. It brought back a lot of old memories and some new ones, since I have read the Hobbit and the first book in the Lord of the Rings series to my son. He was to young to understand, but I will read them with him again when he is older. It was also really touching to see my dad's dwarf bookplate on the inside with the year he got the book written under his name. I also found the bookmark I bought him at a book fair in grade school stuck in the middle of the book. Enough with the sentimental stuff now. I have digressed, and on to the review.

I was so excited to start this book and finally get more information about Middle Earth and what happened before in its history. Once I started I was, sad to say, disappointed. This book reads like a history book. I knew it was going to be a narrative, but I had such a hard time staying focused on this. I felt like I was reading a text book and was dozing off half way through the third page. Still, I wanted to know what my dad liked about this book so much. I probably should have put it down and moved on to something else, but I kept going.

The book opens with a creation story, the story of how there was a pocket in the universe and there Earth was created. Each of the gods in this book had a part in how the Elves, Dwarves, and Men came about. I couldn't focus on this because it was just such a dry read. Once the history progressed and I started to recognize the names of characters I have read about, I started to become more interested. The best part of this for me was the very last volume in this story, and that is the one that dealt with the creation of the rings.

I'm glad I read it mainly because it opens the door for more literary discussion with my dad. Overall though, I wouldn't have kept going had it not been for that reason. I did like the last part of this book which is why I will give it 2.5 stars here on my blog. When I rate this on Goodreads and Amazon I will have to go with 2 stars. I would only recommend this to someone who is a die hard fan of Tolken's work or a fan of historical text. This is fiction, but it reads like a text book, so if you are a fan of that style then you might enjoy this.
Fantasy Sci-Fi