The Shadow Vol: 3 by Chris Roberson 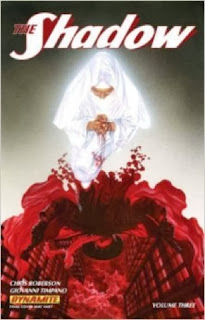 So the book was not as good as I had expected. The plot was a little slow, and the dialog was cheesy. It was kind of fitting because it felt like the old radio drama. I wasn't around to listen to it live, but I have heard some of them. In this book The Shadow is after a homicidal nun who is out to dispatch her own brand of justice on the sinners of the world in hopes of saving their immortal soul. Homicidal nun did sound promising, but I guess I expected more along the lines of action. It took three quarters of the book for a really good action sequence to happen, and then it just sort of ends. Maybe I was being to picky, but I wasn't all that impressed with the action in this book.

The art work isn't to bad in this book. I was expecting some amazing scenes from Alex Ross, but was saddened when he only did the covers. I have defintly seen much worse art work, but I felt it lacked detail. The faces were not really there and felt as if I was looking at the characers down a tunnel. The other thing about the art work, that I really hope was becuase I got an advanced digital copy, was the fact that it looked blurry or smeared. I really hope that this is because of my download, but if the book comes out and looks like this, I wouldn't spend the money on it. 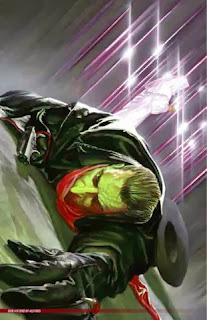 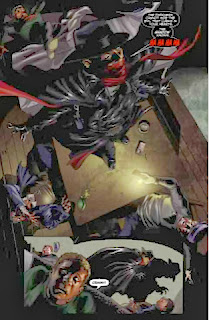 The left Picture was done by Alex Ross, and I hoped this was how the art work was throughout the whole book. He only did the covers to entice you to read I'm sure. The rest was more like the picture on the right. It wasn't bad but I had higher hopes.


Overall this was pretty good. It was entertaining, and I'm glad I read it. I wish there was a little more depth to the story, and I am hopeful the art work is better than I saw. If you happen to see this in the library I might recomend picking this up to give it a read if you like the noir style comics. I will give this 3 stars becuase on Goodreads and Amazon I can't give it 2.5. This was better than a 2 star rating but I don't feel it deserves the full 3.
Graphic Novel