The Invention of Hugo Cabret by Brian Selznick 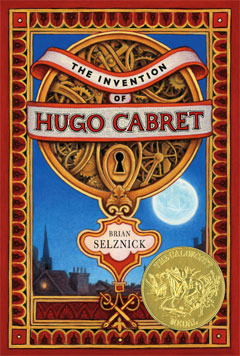 I am a little late to the party with this one. I must be honest and say that I had not heard about this book until well after the movie had come out. I loved the trailer, and the idea of this mechanical man drawing a secret note once fixed seemed intriguing. I still haven't seen the movie yet, but it has been on my to watch list for along time. Here is the trailer that captured my attention so well:


It wasn't until a year or two ago that I found out Hugo was based off of this book. I had to put this on my to-read list but it sadly rested at the bottom. There were a lot of other grown up reads I wanted to get to first. The last time we all went to the library as a family my lovely wife had the idea that we should just get The Invention of Hugo Cabret and read it as a family. My son is almost 4 and my wife and I have both read books to him individually but this was the first time we read as a family. I was very excited for this to be our first family read. My wife and I traded off nights that one of us would read while the other just listened.

Don't let the page count fool you. There is actually very little to read. Most of the book is pictures drawn by Brain Selznick. The art work is pretty good, and it really does help move the story along. In some parts the story only moves forward by the pictures. My son really liked the pictures, and it was so hard for him to not spoil parts for me on the nights I wasn't home when they read it.

Since I have talked about every other aspect of this book it is time I mention the story. The story was very engaging. Even as an adult I couldn't wait to see what happened next in Hugo's life. There were times I just wanted to read ahead after we put my son to bed just so I didn't have to wait. Poor Hugo has lost so much in his life. His father goes to work one night and a fire claims him. Then Hugo is forced to live with his drunk uncle in the train station who just disappears. Left alone in the train station apartment, Hugo is left to fix the clocks in the station and fend for himself so he isn't thrown into an orphanage. The only thing that keeps Hugo going is the automaton his father was working to fix.

Hugo recovered the robot from the wreckage of the museum his father worked at and took it back with him to the train station. The mystery of what the automaton will write was a lot of fun.  I do recommend this book to anyone looking for a good story. It is a very quick read and very entertaining. I give this four out of five stars. We all enjoyed this book and now I am anxious to read the other books by Selznick.