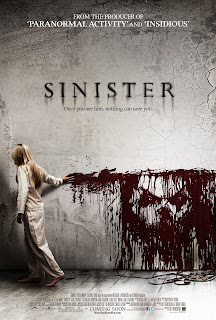 Summer is coming to a close and Fall is just around the corner. This means it is time for me to watch as many Horror movies as I can before Halloween. This is may favorite time of year and Halloween is my favorite holiday. Every year I watch the same movies in preparation for Halloween. These are usually Nightmare on Elm St, Friday the 13th, Halloween (original and Rob Zombie remake), and Texas Chainsaw Massacre. I also try to catch up on recent movies I haven't seen.

My wife used to be a big fan of horror movies before our son was born. Then her mom gene kicked in and she just doesn't enjoy them as much. Since going to the theaters is so expensive I can't justify it for just myself to see these Horror movies. Still, she does get in the mood to watch one every now and then and our library has a great movie section. So we watched this a few days ago and I wasn't as impressed as I had hoped. The trailer looked amazing, and this is one of those movies that relies on what you don't see to be scary. It has violence and blood in it, but not in excess or over the top just because it can be.

When we first saw the trailer this was a movie that right away intrigued us. The idea of a demon living in pictures was a really creepy thought. I mean, how closely do we look at the photos we take. It could be very likely that if we looked close enough we might just see something we can't explain. Very creepy thought. Well after seeing the movie I would have to say that the scariest parts are in the trailer.

The movie is about a True Crime novelist who moves into the house of a family that killed themselves. Every member of the family hung themselves except their youngest daughter. She has been missing since this occurred. Ellison Oswalt moves his family into the house this happened at so he could try to uncover the truth about this event. While unpacking he comes across a box of home movies in the attic. The movies are of multiple families in different cities who have been murdered in horrible ways. While looking into these movies things begin to happen around the house. His kids are beginning to draw pictures of the deaths and the home movies are beginning to play on their own.

This wasn't a bad movie but I was expecting something much scarier. I felt like the hype for this movie was better than the actual movie itself. I also found myself not really caring about the characters. In a story like this you want to feel for them and try to put yourself in their situation. I couldn't do it, I just kept thinking "Should have left it alone." I think that once he saw the Demon in the pictures it was to late but I wouldn't have continued my search after the weird stuff started. I really felt he brought the whole thing on himself and no amount of eye rolling on my part could stop him.

I also want to point out that this review will be included in the R.I.P. Challenge put on by Stainless Steel Droppings. This will be for the Peril on the Screen part of the challenge, and can be found in the review section.