I was incredibly fortunate to win this in a Goodreads Giveaway. I usually never win those, so I couldn’t be more excited. I’ve wanted to play the Batman Arkham games since the first one was released, but I don’t have a PS3 or an XBOX. Other things are more important, so my video game days had to take a hiatus. This book is based on those games which makes the artwork unique and the story a direct tie in. This book collects issues 6-10 and apparently fills in gaps with the games’ stories.

The game stays close to the Batman mythos when it comes to characters and Gotham city. This was actually very refreshing because a lot of times people will do a tie in graphic novel and it’s nothing like what you would expect. The one thing I really liked was seeing Tim Drake back in the Robin suit. The game hasn’t kept up with changes in the Batman books fully so this was a nice surprise. I always loved Tim Drake as Robin. I always felt bad as to how they pushed him out as Robin. Tim Drake was forced to become his own hero and he took up the mantle of Red Robin. He fits very well into this hero so it worked out for the best, but since Battle for the Cowl he has been especially bitter.

I’m getting off track here, there were a lot of things I liked about this book and only a few I didn’t. The biggest thing I didn’t like about this book is how the Penguin is written. He spoke in this weird cockney accent and his English was terrible. I always knew penguin to be an educated calculating criminal and this portrays him as a man with a plan, but the dialog really bugged me. Maybe it was just how I was reading it and I’m exaggerating, but I didn’t care for it.

I did like that each issue in this collection was its own story. They do tie into the whole Arkham City story from the game, but each issue could be read individually and stand alone.  Most of the issues in this collection were amazing, and some I just thought were ok. My favorites are #6: Theater of Violence, #7: Arkham City Sirens, and #8: Crocodile Tears. Crocodile Tears was probably my favorite because of the little origin story of Killer Croc.


This book was much better than I expected. Being a video game tie in, I was afraid this would just have a lot of cool artwork and no story at all. Or worse yet, it could have changed everything there is about Batman and the characters in that series. I was wrong, and not only was the art work really well done, but the stories were great.  I also want to point out that not only was the art work amazing but the book itself was put together very well. This is a hard cover edition, and I always take the dust jackets off so I don’t damage them while reading. When I removed the dust jacket I saw these great pictures of Batman and Robin directly on the book itself. Here is what it looks like without the dust jacket. 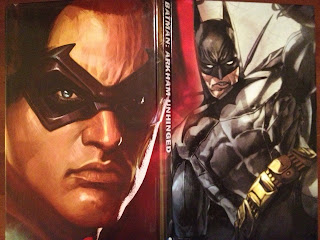 I was really impressed by the quality of this book, and I’m so glad I was fortunate enough to win this.  I am now on the hunt for Volume 1 so I can catch up and continue to follow this series. This was well worth the read and a solid 4 out of 5 stars.
Graphic Novel