Harry Potter and the Half Blood Prince by J.K. Rowling 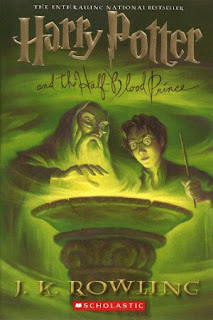 Slowly but surely we are getting through this series with my oldest. He is a huge fan of Harry Potter and knows his trivia already. The look of his face when we got to the end and the big surprise hit was priceless. If you have read this book or when you read this book you will know exactly to what I refer.

Book 6 in this series is dark. The wizard world now officially knows that Voldemort has returned. Now that the world knows Harry and Dumbledore are not crazy, the pressure on them has become tougher than ever. Everyone may know Harry was right but now they know he is the chosen one. Harry is in fact the one person to end Voldemort. This book has two story lines that progress through the book.

The first story line leads right into the title. Harry is taking potions this year and he didn't expect to The reason is Snape is now the Defense against the Dark Arts teacher and since the new teacher isn't as strict Harry can follow his school plan to be an Auror. Since he wasn't expecting to take the class he has to use an old book. While using this book he finds little notations in the margins. These notes were made by none other than the the Half-Blood Prince. These little notes help to make Harry the best student in the class which will come in handy if he wants to get the information he needs for Dumbledore out of Professor Slughorn.

This leads us to our second plot line. Dumbledore is away from school a lot but he is taking time to work with Harry on a very important back story. I know what you may be thinking, this is the 6th book I think we know everything there is to know about Harry's backstory. This book isn't about Harry's story but rather the early days of Voldemort. Dumbledore and Harry have to find out what secrets Voldemort is hiding and the best way to defeat him.

I love this book. This is my second read of this series and I have to admit that my opinions haven't changed at all. I have re-read other series and found that the books didn't hold the same magic as when I read it for the first time. The Harry Potter books have remained some of my favorites. and now that my wife and I take turns reading this to our 7 year old  there is even more magic watching his face as we read these. I stay firm on my 5 out of 5 rating.