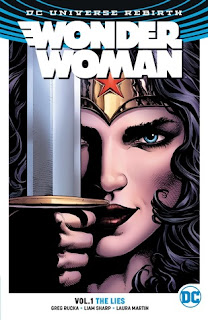 I have always liked Wonder Woman. She really is this positive role model for girls to show they can be strong and confident. I didn't read Wonder Woman until Crisis on Infinite Earths and then I didn't read her through New 52 except for one of the volumes. Rebirth has brought my favorite heroes back to the greatness they once had before New 52 so when I had the chance to read this for a review from NetGalley and DC Comics I took it. Thank you to DC Comics and NetGalley.

So you need a little bit of Wonder Woman history before I get into things so bare with me. Originally Wonder Woman was the creation of her mother and sand on the beach of her home. The amazons are devoid of men so there is no children running around and Hippolyta wanted a daughter. She formed a baby girl out of the sands of Themyscira and beg the gods to bring this child to life. It was always a very touching story and one I have enjoyed. New 52 changed things, Wonder Woman became the child of Zeus making her a Goddess. 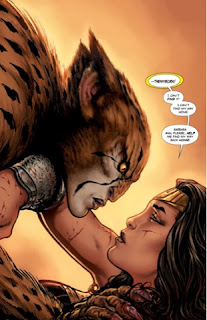 This volume we find a Wonder Woman torn apart by conflicting memories. She remembers the original story and being the child of Zeus so she is having a crisis of identity. At the very begining we see this crisis and struggle to the point that we see her change from the sit she has worn all through New 52 to the Wonder Woman suit of old which was a great moment. Part of this struggle to find herself she realizes that she cannot fine Themyscira, she can't go home. To do that she needs to find help and she finds it in the most unlikely place. Diana seeks out one of her enemies known as Cheetah. Cheetah blames Diana for the curse she is under and it becomes quite a challenge for Diana to bring her around to help her and in return find a way to help get Cheetah back to her original self. 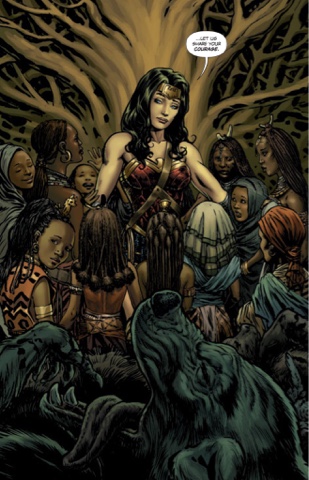 Once she is able to convince Cheetah to help her she finds herself in the exact same place as good old Steve Trevor. She is now trying to rescue him and his team while trying to kill a creature who has kidnapped women from the local village. This does open up one of my favorite pages in the whole book which just highlights the point aI made earlier about Wonder Woman being a symbol for women to be strong. If you can't read what Wonder Woman is saying it is "...let us share your courage" which to me showed that as strong as she is there are still women out there in the world who see through some of the most horrible conditions. I just liked this page and had to share it. I enjoyed this book so much and I can't wait for the next volume to come out because I will be continuing this series. I give this 4 out of 5 stars.