The Walking Dead vol 26: Call to Arms by Robert Kirkman 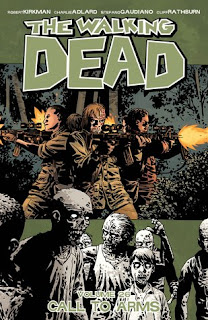 So much has gone on in the Walking Dead that I was anxiously waiting for this next chapter. It has been out for awhile and I really should just start buying these but for the time being I still put my name on the reserve list long before it is even released. If you haven't read the books up to this point then you may want to stop here. In the last book Rick was attacked by an Alexandrian, Carl and his girlfriend have been Exiled to the Hilltop, and the Whisperers are letting Alexandria be for now.

What can I say about this book but Holy Crap WOW!!! So much happens without a ton of action but just enough violence to make this an almost perfect book. We find out exactly what Rick plans to do after his near death attack. Negan plays a bigger role in this book which was both awesome and massively confusing.

I loved this book and really wish I could say more but I don't want to ruin a single panel. So this is going to be a short one. I do wish there was more zombies in the book but the story is amazing. So I'm giving this 4 out of 5 stars when really it is a 4.5 star read. Read this series it is well worth the time to get to visit with these characters.