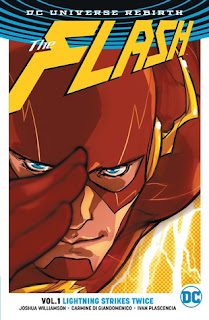 Let me start off by thanking Net Galley and DC Comics for allowing me to read this book for an honest review. I have been very lucky to have been able to read the Rebirth comics of my favorite heroes.

Barry Allen has a lot to contend with in this book. It starts off a little confusing to be honest with you. We find Barry working CSI on a case that is very similar to his mother's death while having visions of Zoom and Wally West. However, Wally comes out of that vision and is back running along side Barry for a few pages. Now here is where I get confused. I didn't read a lot of Flash during New 52 but I did before that. I remember Wally West and him being Kid Flash, but now we have another Wally West who is Iris West's Nephew who also has a touch of the speed force. What book explains the two Wally's? I have to read that one.

Anyway, this all happens in the first few pages and that is all we get of the visions and return of Wally West. I'm sure this is setting up future stories but I was hoping for something about this. Instead we get one heck of a story that could mean big trouble for Barry. A Speedforce storm hits Central City and strikes a whole lot of people. Now flooded with speedsters Barry has to split his time between CSI work, being the flash, and training new speedsters. This also brings about a new very fast and very dangerous villain known as Godspeed.

This was s great way to start of the new story line with the Flash. I couldn't put this down and just flew through it. I highly recommend this to any fan of the Flash because it is very well written. My only complaints about this book is the set up in the first few pages that didn't go anywhere in this volume and the art work. I didn't have any pictures that really stood out for me to include in my review this time. I try to get some art from the digital comics I read as an example but the art is kind of fuzzy and not very detailed. I get that it shows just how fast Barry is at all times but I have read other comics that have still been able to convey this and have more detail. I give this book 4 out of 5 stars.
Graphic Novel