Harry Potter and the Order of the Pheonix by J. K. Rowling 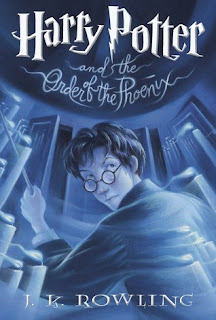 Order of the Phoenix

As I have mentioned in previous reviews my wife and I are reading these books with our 7 year old son. We take turns reading a chapter and it has taken us a long time to finish this book. We love how excited he gets when we read these book and then watch the movie. This is one of my favorites for so many reasons.

So the Order of the Phoenix is all about this secret group of wizards and witches who are dedicated to standing up to Voldemort and his Death Eaters. This group included Harry's Parent's back in the day so Harry is desperate to become a member. However, secret wars aside Harry has to return to Hogwarts for his fifth year. It is at school where Harry meets one of the most evil, most hated, and horrid villains of all time; Dolores Umbridge. Has anyone else felt that the most secure place on Earth has this revolving door for villains? Here is where the spoilers for earlier books come in. In book 1 Voldemort is riding on a professor, book 2 Voldemort unleashes the Basilisk in the bowels of the school, book 3 (bad example), book 4 has a Death Eater disguised as a professor, and now this book has Dolores Umbridge who is a despicable person.

Umbridge is taking over Hogwarts slowly and forcing Dumbledoor out. She has control over everything and Harry and the other kids need to take things into their own hands. Harry sets up a secret club to teach other students how to properly defend themselves against the dark arts. Ok, so this seems like a lot do deal with in one book right. Battling against a power hungry Professor, secretly teaching students how to fight against evil, and dealing with big exams. Well this isn't everything. Harry has been having these visions. He can see through the eyes of not only Voldemort, but his pet snake as well. Harry has no idea what these visions mean and the one person who can help him figure these out is Professor Snape.

I really love this book and I can go on and on about this for pages. Book ,3 Prisoner of Azkaban, is my favorite still but this is a very close second. There is no hesitation in me giving this 5 out of 5 stars. We have taken a little break from Harry Potter for now but I am looking forward to getting back into them. It has been so long since I have read these, and the last time I even saw the 6th movie was when it came to DVD. I didn't even have Blu-Ray back then. It has been awhile. I also must add that my wife disagrees with my revolving door of villains theory. Since Voldemort made it into Hogwarts attached to a professor and in a book the Ginny Weasley brought with her, he technically didn't just walk in. Since she reads these posts I feel I must include her thoughts on the matter so you all know I did have a voice of reason and stick by my goofy theory.
Childrens