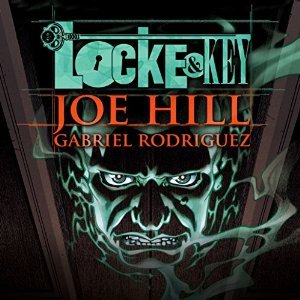 I first read this series the way it was originally intended, in Graphic novel form. When I saw this was offered as a free pre-order last year on audio through Audible.com I jumped all over it. Since I have already read this series I saved this specifically for the RIP challenge this year. Let me start off by saying this review is based on the audio version only.

I loved the series. These books were expertly written and drawn. This is a story about a house who holds all kinds of different keys and doors that have all kinds of magic. One Key separates the soul from the body, one puts your soul in the body of an animal, and other keys do things from controlling shadows and allow the user to open their head and remove or put in anything they wish. It is a very creative idea and I loved finding out all about the different keys as the story progressed.

The Locke family has been through a horrible tragedy. While on vacation two students or the father kill him and brutally beat his wife. The oldest son Tyler walks in on the brutality and beats both assailants to a bloody pulp almost killing them. After the funeral the family moves into the old family mansion  where they stumble on the keys. The magic only works for the kids and once they grow to adult hood they will forget the magic like it was nothing more than a dream.

This audio was really cool on first look. This is done as a radio drama with several different actors, sound effects and an impressive musical score. I may have waited for a year to listen to this but I was excited to finally get to it. As I listened to this I realized that it really shouldn't have been made into an audio. The problem with this series is it was written for comic books which means the movement and pace of the story relies heavily on the art work to move the story in several areas. There are moments of action sequences where all you hear is grunts and sound effects because the book didn't have any dialogue.  I was kind of disappointed because of how much they relied on the musical score instead of just describing what is going on.

If you haven't read the comics or comic books are just not your thing then this is worth the experience. Radio dramas are a thing of the past and when I find a good one I tend to hold on to it. The story is also very good. Sadly where I loved the series on it's own I have to rate this Audio book as a 2 out of 5 star book. This is my 3rd entry into the RIP challenge and one more will meet my goal of 4 books.