The Drawing of the Three by Stephen King 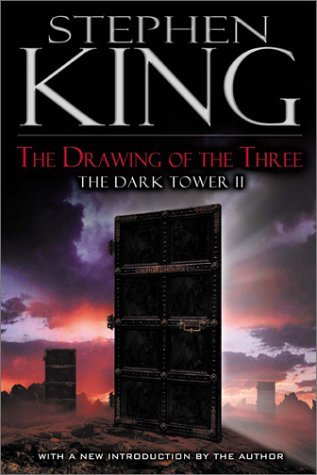 The Drawing of the Three

I'm just going to say this right now. It is impossible to write these reviews without spoilers. I wont write anything to spoil this book in my review but I will refer to events in the first book. So if you haven't read these books and want to then I would suggest turning back now until your own journey to the tower can begin.

The man in Black has left a dried up corpse of himself behind and Roland is left wondering how much time has really passed in his Palaver. Now Roland can continue his journey to the Dark Tower and try to deal with the prophecy the Man in Black set forth before the end of their palaver. Roland will build his Ka-Tet in order to make it to the tower. A Ka-Tet is like a family made up of different people with the same goal. The prophecy mentions three that Roland will come across on his road. He will meet The Prisoner, The Lady of Shadows, and The Pusher.

Roland wakes from a dream where he is the one who drowns and not Jake. He's troubled by the loss and the fear that the only thing he cares about it the dower. This drive gets him moving to wallow in his mistakes. Along the road he comes across these Lobster creatures called Lobstrosities which takes off Roland's first two fingers on his right hand. Now fighting infection and trying to keep his wits about him Roland comes to the first door labeled the prisoner. This is where we meet Eddie Dean, the man imprisoned by his addiction to Heroin. This is actually a very large part of the book. The other two doors are shorter. Eddie is no bigger a character than the others but his story is the most detailed. I loved this part but it does feel like King (or his editor) decided he needed to get to the point already so the rest was abbreviated.

The second door Roland and Eddie come to is labeled The Lady of Shadows. Odetta Holmes is the lady of shadows. She has had a rough life and has the split personality and handicap to prove it. Odetta  is the sweet southern bell who has this twisted racist dark side named Detta. To make matters worse she was pushed onto the tracks of the subway and had her legs cut off. These women in one body become the second of the Ka-Tet. Now Roland is dealing with spreading infection, a crashing withdrawal ridden Eddie and a woman who hates him to his core on the trip to the third door.

Door three is labeled the Pusher. This door leads Roland to a man who character is utterly despicable. The pusher refers to his hobby. This make likes to push people under the bus. Literally, he pushes people into oncoming traffic and trains. He is this power hungry business man by day and a psychopath by night. This is a shorter story to round out the three doors, but the ending is not what you would expect.

I loved this book and for me each one gets better and better. Here are the main characters we are going to follow on this epic journey. I'm so glad I got around to reading these again. There are just some books you can read over and over and still love them. 5 out of 5 stars and I highly recommend this series. This is one of the books I am still trying to locate in hardcover illustrated edition so wish me luck.
Sci-Fi