Injustice Gods Among Us Vol 1 by Tom Taylor 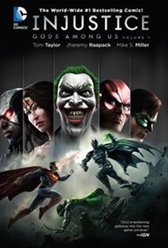 Injustice: Gods Among Us

I finally got around to reading this. I have no idea why I put it off so long. I played the game on my iPhone and iPad as soon as it came out until I got bored with it an moved on. I also read Year 2 Vol 1 a long time ago because NetGally and DC Comics were kind enough to let me have an advanced reader copy. It was a little hard to read that book and not know what was going on in the first 2 volumes. I happened to be at my library and this was sitting there on the shelf so I picked it up and I'm so glad I did.

This book is such a contradiction in a good way. This book is dark and light, full of pain and friendship while at the same time tearing it apart, and love and betrayal. This makes no sense at all and just typing that sentence seemed like I wasn't doing this justice. Pun not intended. If you played the game you will know that heroes fight each other and villains even turn against each other and side with the heroes. Reading this I can see a strong air of politics laced in these pages. Friend's turn on each other and all for the simple reason that they want peace, but can't agree on how to get it.

I know this is fiction and even more it is comics, fantasy, and yet I have shed tears over this book as well as felt anger and rage. This book takes some liberties with the story and mythos of the characters in small ways, but most notably with Superman. The story opens up with Superman finding out Lois is going to have a baby. Now this has been a huge topic of discussion among Superman fans and comic readers because we know that it isn't possible for Lois to have Superman's baby. The physiology doesn't work or something, but it has been mentioned int he comics a few times that he can never have children with her. Injustice doesn't fit in the same universe as the on going series so I let it go.

Ok, I've put off what starts this whole mess long enough. Only one person could set all of this in motion and turn heroes against each other; The Joker. The Joker gets bored trying to get Batman so he goes for an easier target, Superman. Joker kidnaps Lois and then finds a way to make Scarecrow's fear toxin affect Superman. He thinks Doomsday has returned. I wont say how it happens but Superman kills Lois and his unborn child. To make matters worse a nuclear bomb was linked to Lois's heart and when it stopped beating Metropolis was wiped off the map. Racked with grief he clearly ins't thinking clearly and no amount of super hero interference stops Superman from killing the Joker.

Superman now has nothing to keep him tethered to his morals and the limits he placed on himself so he decides he is tired of the criminals always getting out and doing what they do best. He is also tired of the fighting and wars all over the world and he is done sitting back and watching this happen. Superman takes in upon himself to fix the problems of the world and stop the fighting. Superman's best friend Batman tires to turn him away from his extreme methods and bring him back from his grief without success. This is what causes the fighting and tears our heroes apart.

I loved this story and I am definitely going to read all of this series as I can. I wish I didn't put this series off as long as I did and would highly recommend this to any fan of DC Comics. 5 out of 5 stars for sure.
Graphic Novel