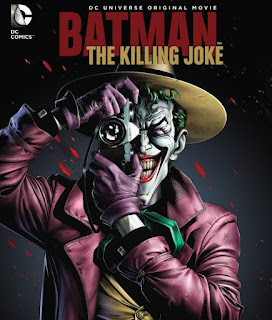 What can I say about this that I already havent said in my review for the comic? This is one of my all time favorite comic book stories. Not only do we get an origin story for the Joker but we see that dynamic between Batman and Joker where they almost need each other. Batman needs Joker to keep him on his path and to remind him there is a line and Batman can never cross it. Joker needs Batman because with out Batman his life is empty and meaningless. There isn't a punch line without the caped crusader.

I have been waiting for this movie for what seems like forever. I remember when I first heard this was going to be made and since then I have hung on every post and article about this. The casting was going to be key but only for Batman and Joker. Whoever was in charge of casting made the best decision ever. Batman was none other than Kevin Conroy who voiced Batman in the Animated Series and a few other DCEU animated movies. He is the voice of Batman and what all fans hope for in these movies. When you have such a strong voice actor for Batman who can match his intensity. Mark Hamill reprises his role as the Joker for this movie. Mark Hamill was the voice of the Joker in the Animated series and he is amazing. He is the perfect amount of crazy and scary all wrapped up in one. These two were the only ones who could voice these characters for this movie and I am so happy to see them in a darker more adult movie.

What do I mean by a more adult movie you ask? It's a cartoon right? The DC Universe animated movies hold fairly close to the comics and usually have a PG-13 rating. This is the very first Cartoon movie, let alone Batman movie with an R rating right from the beginning. This stays really close to the source material but at the same time expands on the original story to give more background around Barbara Gordon and her story. This movie stays so close to the source that there are scenes straight out of the pages of the comics. I loved seeing these scenes because they are some of the best panels in the whole book. The artwork from the comic is iconic and amazing and that translates so perfectly in this movie. Take a look at the trailer to see just how detailed the art really is and how incredible and epic this story is.

I loved this movie and I loved it so much I had to write a review about it when I didn't plan on it originally. I give this movie a 5 out of 5 and recommend this to all Batman fans. Now I am slightly biased because I read this when it first was published and have probably read it a hundred times since. My wife is new to this story and she only thought the movie was ok. Once I explained a few thins she seemed to like it more but she didn't fall in love with this like I did. I stand by my review but wanted to give a different perspective to this also. It is a dark story and there is so much to think about in this that it will sneak up on you after the fact. Currently this movie is available digitally on iTunes and other platforms but will be released on DVD and Blu-Ray on August 2nd. I'm so glad I got my copy so I can watch it as many times as I have read it.
Movies