Walking Dead Rise of the Governor: Road to Woodbury by Robert Kirkman 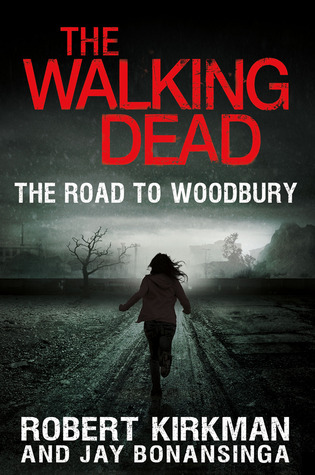 I love The Walking Dead and a friend of mine spoke very highly of this series. This is book to in the Rise of the Governor series. The first book was all about how the Governor we know from the comics and the show came to be. This book is mostly about our new character Lilly. She is just trying to survive out there in random encampments but inevitably something goes wrong and she has to leave. Until she makes it to Woodbury.

Half of the book is Lilly's journey that leads her to Woodbury and her meeting with the governor. To be honest I thought her story and this part of the book was really boring. It took me awhile to get back into this book once the story picked up in Woodbury. I almost wonder if I missed somethings at times because I was only half invested in this book. Lilly is kind of a whiny character and I kind of understand why. The Zombie apocalypse is a rough world and it can be hard to cope with something like that. However, this world has toughened up a lot of characters in this series and she needs to get with the program. She will never survive if she constantly is throwing a pity party.

Once Lilly is in Woodbury the book does get more interesting and what I did like was seeing the Governor through her eyes. By this time the Governor has completely lost his mind and is growing to be the horrible individual we know in the comics and show. It was good to see the terror in her when she was with him to help further build his character. There were some really cool things in this book that lead into a lot of what we have already seen in the comics. Just in case you haven't read the comics or watched the show here are some spoilers for those You might want to skip ahead to the rating in the next paragraph. In this book we get the beginnings of Woodbury fight club, and the fish tanks of heads in the Governor's apartment. We also get a little more quality time with Zombie Penny towards the end which is just disgusting.

I liked this book but expected more. I am anxious to start the next book and continue on in the series. I just thought this book was ok. I give this 3 out of 5 stars. I hope the next book is better and maybe takes a step back to the format of the first book.
Horror Zombie